In the last year liquor law violations referred for disciplinary action increased from 62 to 142, a surge of over 100 percent according to the Tarleton’s annual security report, the Clery Report, for 2014, which was released last Sept. 30

To be documented under the Clery Act, a liquor law violation must meet the state definition of alcohol offenses. 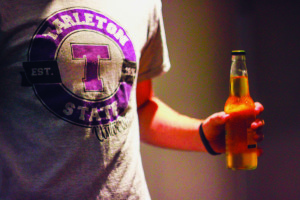 “The increase in liquor law violations referred for disciplinary action is due in large part to the steady increase in students living on campus from 2012 through 2014,” Tarleton Public Relations Manager Cecilia Jacobs said in an email interview.

Of the 142 violations, 109 were reported to occur in a residential facility. According to campus rules, “possession or consumption of alcoholic beverages on property under control of the Texas A&M University System will not be permitted except in special use buildings and facilities as designated. Students, faculty and staff who violate the provisions of this rule are subject to disciplinary sanctions under applicable university procedures.” Alcoholic beverages are prohibited in areas such as residential halls, stadiums and other facilities.

Tarleton University Police Chief Matt Welch said, “The biggest deal, I think, is that the housing staff is just noticing more and reporting more. I really think the spike is a combination of RL&L doing a better job of documentation and our growth.”

Junior Residential Leader (RL) Hayden Roberts has dealt with alcohol in the residential halls. He said that the procedure is to call the control center and the on-call residential coordinator and inform them of the situation. All of the alcohol is gathered into the center of the room, and the RL gets everyone’s identification and their university identification number. Once the police show up, the RL is responsible for writing up a report. 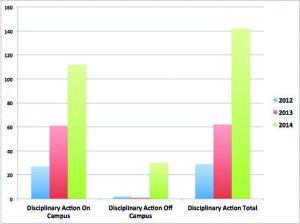 The increase in violations reported for disciplinary action in the Clery report over the past three years is illustrated in this graph.

According to Welch, liquor law violations are dealt with on a case-by-case basis. The student who is in possession of the alcohol and the situation (whether or not the student has a clean record, admits what they did is wrong, etc.) determines whether or not the student is arrested or referred to Judicial Affairs. In the past year, arrests for liquor law violations decreased from 17 to 16, with only nine of those arrests occurring in a residential facility.

“We aren’t trying to ruin people’s lives,” Welch said. “Our job is to educate students about life.”

One of the measures implemented by the university to increase students’ alcohol education is Campus Clarity. This online program is designed to teach students about making informed decisions about alcohol, understanding what consent means and how sexual assault can happen. This year, all incoming freshmen are required to complete the two-part course as part of their First Year Seminar credit. One of the sections, titled “Partying Smart,” focuses upon making smart decisions in relation to alcohol consumption.

“I believe Campus Clarity helped give insight into various situations you’ll come across when you’re in college and the best way to deal with those situations,” freshman Bianca Serrano said. “Honestly, I don’t think it discouraged underage drinking, especially since anyone can use a fake id website nowadays and buy alcohol easily. Drinking seems to only be a problem with underclassmen.”

“The issue of drinking on college campuses is complex,” director of the student counseling center Dr. Stephanie Robertson said. “Like other universities across the country, we’re constantly working to address the issue of underage drinking. For example, as we made the transition to Campus Clarity, we worked with a consultant to identify policies and programs on campus that may have a significant impact on underage drinking. As a result of this study, and a renewed focus on the issue, we’ve made several changes including participation in the STAR Council Community Coalition on underage drinking, changing our alcohol sanctions to an evidence-based alcohol-specific course, and increasing educational outreach through programming.”

As shown above, in the United States, a Minor in Possession is illegal and typically a misdemeanor. It follows therefore that anyone who is under the age of 21 and possesses alcohol in the United States – with the exception of special circumstances – is violating the law of the state. If you find yourself charged with underage possession of alcohol, you should contact a Defense Lawyer to learn more about how they can deal with these types of cases.