The buildings on the university’s campus in Stephenville, Texas, are undergoing many changes that include new construction, expansion, and renovation of current structures, demolition of older structures, as well as specific landscaping that is meant to complement each particular venue. All are components of Tarleton’s 2010 and 2020 Master Plans, which are being completed in phases.

There have been mentions of redoing campus accommodation, as well as the building structures, to bring a more modern update to the rooms and bathrooms/ensuites. From looking at a frameless shower door for all ensuites, to changing the carpeting to wooden flooring, there are many ideas and options that could be used to help accommodations appeal more to potential students, and promote a more comforting atmosphere. 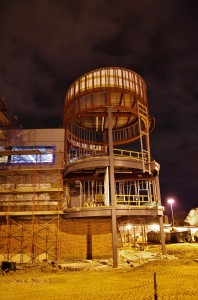 One of the most visual renovations taking place on campus is the tower on the corner of the O.A. Grant building.
(Photo by Justin Brundin)

The most visible of these changes may be what is happening with the O.A. Grant building. The overall alterations include two additional floors built on top of an existing first floor. But one feature that really stands out is that of a tower on the southwest corner. As this is a new construction, wall stickers will be placed around the building so that students can easily identify where they are in the building and avoid getting confused about what floors they’re on. It also means students can meet more easily if they are working on a group project or are meeting for a study group.

Kelli C. Styron, Dean of College of Liberal and Fine Arts, said in an interview that the new facilities will be “state-of-the-art.”

Some improvements students, staff, and faculty will enjoy in the near future are substantial and numerous, such as study and work areas that will accommodate both individuals and groups, varied conference and meeting rooms, moveable desks for custom seating arrangements, smart boards, video production area with available playback, a broadcast studio, production areas for audio, video, and podcasts, collaborative learning areas, media-scape table, media convergence table, an outside veranda-style study area, editor’s carousel desk, and more. A new Digital Media studies lab is also in the works. Other amenities include a new Dean’s Suite, with a reservable conference room.

The Communications Department will move into the expansion. Texan News Service and Cross Timbers Trails Magazine will be housed in this building, moving over from Davis Hall. Another addition to be housed in the facility is a special area for the Public Relations and Event Management (PREM) program. One feature of this designated area is a kitchen that PREM students will use as part of their learning experience.

The tower will also house the offices for faculty and staff of the Communications Department and the Clyde H. Wells Fine Arts Center, which will be dedicated to serving the Liberal and Fine Arts Colleges and related departments and offices. 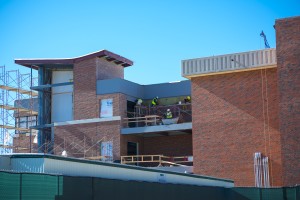 Renovations to the O.A. Grant building include various study and work areas, as well as new offices for faculty and staff.
(Photo by Sherry Gaston)

Currently, offices of the Communications Department are located in the older Davis Hall building. Plans are set to demolish the hall after it has been vacated and everything is moved into the new O.A. Grant building.

Another service the new facility will provide is that of a new home for the exhibit of Tarleton Alumni and former Texas Congressman Charles W. Stenholm.

Styron said that there wasn’t anything like this in other institutions of Tarleton’s size or in this region, referring to the new completed Grant facilities. It’s “one of a kind,” she said.

Clyde H. Wells Fine Arts Center is experiencing changes of its own. Renovation plans for it include a complete updating and the addition of new items such as getting carpet installers texas for a new carpet, paint, trim, wall coverings, and furniture. We imagine that some of the rooms will be renovated in terms of paint and trim, but some of the antique furniture will remain to ensure that the building does not lose all of its history and rusticness. If it needs updating, there are firms similar to Driscolls Antiques Ltd who sell antique furniture and this may be an option if they want to ensure that the historical elements remain in the building. Apart from that, we expect most rooms to be completely updated with more modern furnishings and designs to show the development of the campus. We will likely see that many of the changes involve the music library, music offices, art gallery, and improvement of acoustics, along with a new, third art studio coming to fruition as well.

Two of the most well-known “rooms” at the Wells Center is the theater and the auditorium. Plans for these rooms involve new carpet, stage flooring, seating, as well as lighting and sound equipment.

Some of the aforementioned plans have already taken place, as anyone who has recently visited the center may have seen.

One note that Dean Styron wanted to express to the Liberal Arts faculty and staff is how appreciative and grateful the administration is to them, and their cooperation and flexibility, that they have been great during all the work; and too, that they know everyone has “the students’ best interests at heart.”

The new residence hall is set to be finished in August, 2014.
(Photo by Kendra Geer)

Move-in dates for O.A. Grant and the Fine Arts Center are July 2014 and August 2014, respectively.

Another current construction project of high visibility is that of the new student housing complex. According to Tarleton’s website, this newest residence hall is being built on what was formerly the western-half of the P-36 Residential Student Parking Lot, which lies just across Jones Street, to the north, from the Barry B. Thompson Student Center. 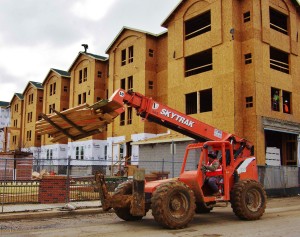 The four-story hall has a price tag of $25 million, and is expected to serve the housing needs of about 500 first-year students. Apartments and rooms for residential coordinators and leaders have been included as well. Each floor of the hall will also have community spaces, study areas, and kitchens.

The hall’s construction is expected to conclude this coming August 2014.

A grand opening celebration is planned for the fall per President Dominic Dottavio’s schedule.