Of the 15 campuses where the deadliest shootings have taken place during the last 50 years, only three specifically encourage their students to “fight” should a gunman open fire during an active on-campus shooting. 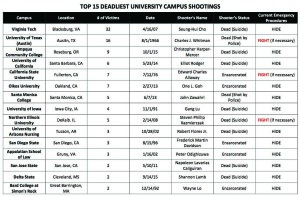 Universities nationwide share common emergency procedures when it comes to the university’s safety: seek shelter and hide. Three universities, however, approach these situations in a more aggressive manner. The University of Texas at Austin, California State University and Northern Illinois University ask the faculty and student body to use physical force and aggression as a last resort.

Like most higher education institutions, Tarleton State University has not been the target of an active shooter on campus. The university is, however, offering on request safety training – called CRASE, short for Civilian Response to Active Shooter Event. This training discusses the civilian response to an active shooter on a college campus by applying the ADD (“Avoid, Deny, Defend”) policy.

Over the last 50 years, there have been 15 separate shootings on college campuses in which there were multiple casualties. All together, the shootings claimed 106 lives. The most deady took place in 2007 at Virginia Tech University, where senior undergraduate student Seung-Hui Cho took 32 lives and wounded 17 others.

Tarleton is also in the midst of writing rules governing how it will implement the “Campus Carry” law that goes into effect Aug. 1, 2016. The law allows people with Concealed Handgun Licenses to carry firearms on college campuses.

According to Tarleton’s Risk Management website, the university is striving to create regulations that conform to the new law, support the university’s educational mission, protect the rights of citizens and ensure the safety and security of the entire campus.

“Campus security is Tarleton’s No. 1 priority,” says university spokeswoman Cecilia Jacobs. “These shootings and others like them, while extremely tragic, have helped universities worldwide to create emergency response programs to better educate and protect students.”

Many of the campus shootings have one common denominator: student shooters. Of the 15 shootings that have taken place in the last 50 years, eight of the shooters were enrolled at the respective university. In one case, the shooter was a professor.

Jacobs said that Tarleton is also committed to the emotional well-being of students as well to their safety.

The university provides a variety of interventional programs, such as CARE, Campus Assessment Response and Evaluation, allowing students to talk with trained counselors about their psychological health.

“CARE is a confidential behavioral intervention program,” Jacobs said. “The goal of the program is to assist any student experiencing problems that might lead to disruptive or dangerous behaviors, and diffuse potentially hazardous situations in a safe and helpful way. This program is the direct result of findings issued after the shooting at Virginia Tech.”

As far as being prepared for an active shooter, Jacobs says plans for a campus-wide emergency preparedness drill are “underway” and “details are forthcoming.”

“Most emergency preparedness programs instruct individuals to flee or hide and then attempt to overtake the subject only in extreme circumstances,” Jacobs said. “This approach has been researched and endorsed by the U.S. Department of Homeland Security and the FBI. Needless to say, a person must use their own discretion during an active shooter event as to whether they run, hide or fight.”

Tarleton Police Chief Matt Welch says time is of the essence and how quickly the Tarleton community and its campus police department respond to a shooting is crucial.

“If there is a shooter on campus, they are also going to alert the fire department to start getting ambulances and EMT people ready, and either myself, Lt. Al Alcon, or probably somebody in risk management will send out a Code Purple [Alert],” Welch said. “Once we know it isn’t a prank call, there will be an officer on the scene. Shots are fired that way everyone knows about it, and we can send out a traffic report.”

Welch says that past shootings have made the actions of law enforcement more efficient and timely so that they might prevent casualties or limit the number of victims.

“Every time there is a campus shooting, afterwards they do a lot of dissecting of it,” Welch said. “What can we learn from it? The biggest one was Columbine, because they surrounded it, they waited outside, tried to get SWAT team in place and in the meantime, people are dying. So they’ve learned, you have to go in. The time for us to meet and exchange business cards is not the day of the shooting.”