Can Ferguson change the ‘ritual’ of black deaths?

FERGUSON, Mo. (AP) — The choir sang, the preachers shouted and the casket stayed closed. The body was taken to the cemetery, and Michael Brown was laid to rest.

Thus went the most recent enactment of “the ritual” — the script of death, outrage, spin and mourning that America follows when an unarmed black male is killed by police.

With a few variations, the ritual has followed its familiar course in the two weeks since the 18-year-old Brown was shot by white police officer Darren Wilson in this St. Louis suburb. It continues as we await the judgment of a grand jury considering whether or not Wilson should be charged with a crime.

Will the ritual ever change, and is it even possible that Ferguson could be part of that? This time, can recognition of the well-known patterns help heal the poisonous mistrust between police and many black people? Is the ritual already helping, in small gains buried beneath the predictable explosions of anger and media attention?

“This tragedy, because the world’s attention has been galvanized, this is one of those things that’s ripe for change,” said Martin Luther King III after the funeral Monday. “There are no guarantees, but what we can say is we have to be committed to doing the work to bring about change and justice.”

The ritual began to take shape in the 1960s, when instances of police mistreatment of black people led to organized resistance in many places across America — and sometimes to violence. As the decades passed, a blueprint developed for how black advocates confronted cases of alleged police brutality: protest marches, news conferences, demands for federal intervention, public pressure by sympathetic elected officials.

Sometimes this led to charges or even convictions of police officers. Sometimes there were riots: Miami in 1980 after police were acquitted in the death of a black motorist; Los Angeles’ Rodney King rebellion in 1992; Cincinnati in 2001 when a 19-year-old was fatally shot by an officer; Oakland’s uprising in 2009 after Oscar Grant was shot in the back while face-down on a train platform. 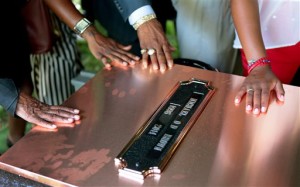 FILE – In this Monday, Aug. 25, 2014, file photo, family members touch the copper top of the vault containing the casket of Michael Brown during his funeral in Normandy, Mo. Hundreds of people gathered to say goodbye to Brown, who was shot and killed by a Ferguson, Mo., police officer on Aug. 9.
(AP Photo/St. Louis Post Dispatch, Robert Cohen, Pool)

The 2012 killing of Trayvon Martin by a neighborhood watchman in Florida added the transformative element of social media. The public was now participating much more intimately in the ritual.

And still, the unarmed black males kept dying. The chants of “No Justice, No Peace” kept rising.

So what happened after Brown was shot on Aug. 9 was predictable:

First, protests and outrage. A narrative forms in favor of the deceased: According to accounts of several witnesses from Brown’s neighborhood, he was shot with his hands up. He was a “gentle giant” headed to college. Pictures of Brown circulate that show him smiling, baby-faced — reminiscent of the childlike photos that first introduced us to Trayvon Martin.

The day after Brown’s shooting, protesters are met with a militarized police response. Violence and looting erupt, and persist for days. Police respond with tear gas and rubber bullets, “scenes that have brought back visions of the 1960s when civil rights activists were met with force in the streets,” says the president of the W.K. Kellogg Foundation, La June Montgomery Tabron.

“This has become an all-too-familiar scenario in America,” Tabron says in a statement.

“Events surrounding the killing of unarmed teenager Michael Brown look all too familiar. As Yogi Berra would put it, it’s ‘deja vu, all over again,'” reads a column by Bill Press in the Daily Journal of Marietta, Georgia.

A backlash builds against the protesters. There are complaints that the liberal media skew the facts to create a false narrative about racist white police. As with Trayvon Martin and Oscar Grant, a narrative forms against the deceased: Based on a video released by police, Brown is characterized as a weed-smoking thug who robbed a store minutes before his death.

Social media spreads facts, rumors and lies at Internet speed. There is a chain email with a fabricated arrest record saying, falsely, that Brown was charged with several felonies. A photo circulates of someone who is not Brown pointing a gun — like the menacing photo of a gangsta rapper that some said was Martin.

“Every time a black person does something, they automatically become a thug worthy of their own death,” the actor Jesse Williams says in a TV appearance.

The main sermon at Brown’s service was delivered by Sharpton, who is as much a part of the ritual as police tape. He began by issuing a collective call of responsibility: “All of us are required to respond to this. And all of us must solve this.”

Sharpton’s solution is twofold: Change the nation’s policies on policing, and repair the black community from within.

“We got to clean up our community so we can clean up the United States of America,” he said to thunderous applause.

“Nobody is going to help us,” Sharpton said, “if we don’t help ourselves.”

Can it actually happen? In Michael Brown’s case, can the ritual be remembered for more than riots?

“Most definitely,” said Ferguson resident Jeremy Rone as he completed a protest march on Saturday.

He said Brown’s death should increase voter registration, which would “put the right people in the right places” to change the way police deal with the black community. Soon after the unrest started, a voter registration booth went up on the corner of the hardest-hit street.

Phillip Atiba Goff, a UCLA psychology professor and president of the Center for Policing Equity, does believe Ferguson has brought us into a different moment, “but with a small window.”

“While I think there will be a push for stronger accountability and data collection that comes from this, I worry that we will repeat the amnesia that followed Los Angeles, Newark, Watts, and so many other urban centers for the past 50-plus years,” Goff said in an email.

“Whatever the immediate good that may come in the wake of the events of Ferguson,” he said, “we fail to honor the legacy of Mr. Brown if our collective attention to these issues and collective memory lasts no longer than the month or two after peace returns to the streets of his hometown.”

Hazar Khidir, a Harvard medical student who traveled to Ferguson with friends to support local community activists, suggested strict policies to regulate police conduct. The current protests, she said, “represent an opportunity to highlight a problem and bring about institutional change that saves other young black men from dying.” 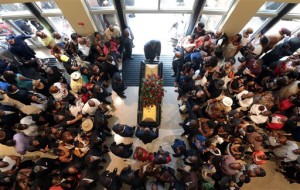 FILE – In this Monday, Aug. 25, 2014, file photo, a casket containing the body of Michael Brown is wheeled out of Friendly Temple Missionary Baptist Church in St. Louis. Hundreds of people gathered to say goodbye to Brown, who was shot and killed by a Ferguson, Mo., police officer on Aug. 9.
(AP Photo/St. Louis Post Dispatch, Robert Cohen, Pool, File)

There are a few glimmers of institutional change.

Those concerned that Brown’s death might not be fairly investigated took note of the high-profile appearance of Eric Holder, America’s first black attorney general, in Ferguson to meet with locals and discuss the federal probe he ordered. At least three police officers in the Ferguson area have been suspended for behavior that came to light due to newly heightened scrutiny of police. The White House is reviewing policies that have supplied police departments with military hardware, an issue that received much scrutiny in Ferguson.

“I trust that what’s happening in the street-level conflicts and clashes in Ferguson are the birthing pains of a new American social order,” Sam Fulwood III wrote for the Center for American Progress.

“I truly believe,” he wrote, “something revolutionary is occurring there that signals a pivot point for American society.”

America likes to measure progress, to count it. When it comes to the killing of unarmed black males, progress will be found in the uncounted:

The young man who doesn’t run from police.

The officer who doesn’t pull the trigger.

The ritual that doesn’t get repeated.

Jesse Washington covers race and ethnicity for The Associated Press. He is reachable at http://www.twitter.com/jessewashington.