In honor of Martin Luther King Jr. Day, the Tarleton State University community took part in a memorial candle walk Wednesday evening to honor Dr. King and those who made their presence known during the civil rights movement. 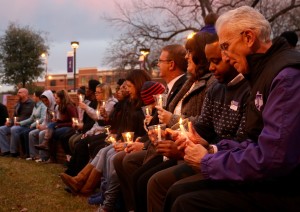 Participants in the amphitheater are listening to the first speaker give an MLK quote.
(Photo by Sydney Burns, Texan News)

This event was organized by the Office of Diversity and Inclusion. A little over 50 people participated in the walk. During the walk, participants had the opportunity to hear excerpts from King’s speeches read by students and facility while reflecting on how his words motivated other individuals during the civil rights movement.

Dr. Lora Helvie-Mason, Director of the Office of Diversity and Inclusion, oversaw the event.

“We hope this event fostered an environment of reflection and also engagement,” Helvie-Mason said.

Klarissa Perez, an intern for Diversity and Inclusion, helped organize and put on the event. She felt that the candlelight walk was very beneficial for Tarleton.

“The candlelight walk was a great way for Tarleton to get the feel of a historical flashback. It was a wonderful way of honoring a man of wise words and showed how students can set aside differences to come together as one,” Perez said. 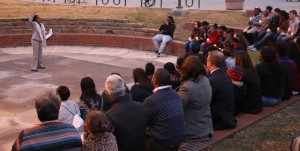 Another student and intern for Diversity and Inclusion, Randi Morgan, felt that the event turned out very well for the first time.

“As we listened to the first speaker and lit our candles, I felt like we were one big family. It’s amazing to think that the reason we are able to do something like walk together as a diverse community is because of the struggles other people faced to diminish injustice and segregation. It was incredible being able to see the crowd of people grow as the night went on,” Morgan said.

After the walk, a screening of the film Selma, which is a chronicle of Martin Luther King Jr.’s campaign to secure equal voting rights via an epic march from Selma to Montgomery, Alabama, in 1965, was shown inside the ballrooms of the student center. 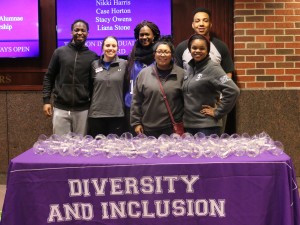 “As Selma was not originally shown in Stephenville, we feel it offers a launching point for guided discussions about the film and its relationship to past and present societal issues,” said Helvie-Mason.

Throughout the entire experience, individuals were challenged to reflect on King’s impact, how they can apply his words to their lives moving forward and how they will continue to make a difference.

“We coupled the candlelight walk with a contemporary movie in order to open the door for additional information and conversations around MLK’s legacy and current events,” said Helvie-Mason.

While this is the first year for the Office of Diversity of Inclusion to host this event, they hope to continue it in years to come.

Helvie-Mason said if there is anything they want those involved to take away from the experience, it is to “feel a sense of purpose and connection to the many values for which King advocated.”