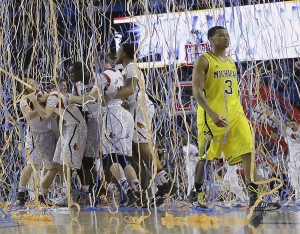 Louisville coach Rick Pitino became the first division I coach to win national championships at multiple schools winning his first in 1996 with Kentucky.  Pitino was also inducted into the college basketball hall of fame earlier Monday.

Louisville was led in scoring by six-man Luke Hancock who had 22 points going 5-6 from the field with all of his successful shots being three-pointers.

He also went 7-10 from the free-throw line and had three assists.  Peyton Siva also added 18 points for the Cardinals including a stunning alley-oop late in the second half. He went 6-15 from the field and had six rebounds, five assists and four steals.

Michigan was back to the championship game officially for the first time since 1989.

The other two appearances were vacated due to improper benefits of former players. AP player of the year Trey Burke led all scorers with 24 points and four rebounds.

Back up point guard Spike Albrecht was a spark off the bench making his first four three-point attempts in a row and added 17 points.

In attendance at the game were the controversy-ridden Michigan “Fab Five” which includes Jalen Rose, Jimmy King, Ray Jackson, Juwan Howard, and yes, even Chris Webber attended the game after being reluctant to include himself with the university at all since any record of the players are gone from the university.

Caleb McCaig is a senior Broadcast Journalism student from China Spring, Texas. He currently serves as the Sports Editor for the Texan News Service.