Topics that few understand but so many go through– It’s been precisely 20 years ago, that Eve Ensler collected 200 stories that turned into monologues. These stories capture and embody love, sex, humor, childbirth, and violence. Riveting, charismatic and haunting stories are kept alive by a cast of students who see the importance of celebrating the female body and sharing the voices that have been kept silent.

The Vagina Monologues, has been performed at Tarleton State University for the past three years. Diversity being among the most important value in the play, not only for the stories being heard but for the people involved. 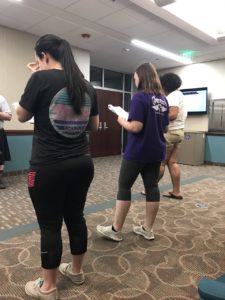 “This is my third year doing the Vagina Monologues and my second year doing the ‘Men’s Prayer.’ The first time I did it I was not completely socially out as a trans male. It’s pretty exciting doing it the way I feel like I should be doing it,” Cast member Marxel Horace said.

“I know for being a victim myself, your first thought is ‘I have no one to talk to.’ But you have to find somebody who has been in your experience. [This play] lets people know you’re not alone,” Cast member Heather Bushart said.

The topics range from funny to heartwarming and can be a reality check on different cultures.

“A lot of the group pieces’ cover issues [on] rape, how mistreated women are and different groups of people. My favorite piece is the ‘Not So Happy Fact,’ it’s shocking. [I know] the men will have to think about having their [own] cut off, it will raise awareness of what women go through around the world,” Cast member Dea Brown said.

“There are things that get over looked and things that are talked about. Almost as seeing it is taboo, everything [in the play] needs to be talked about and not a lot of people [should be] put in the backburner,” Horace said.

Director, Prairie Parnell, was determined to bring back the play after a 2009-2015 hiatus.

“Spring 2015 is when we brought it back, so from 2009-2015 nobody wanted to touch it. I wasn’t sure at that point in time if the Tarleton community would feel very welcoming to it. But they have proven very supportive as we got going,” she said.

Parnell describes the establishment of the play process throughout the years as “slow and easing up to this point.” She added that the success of the play comes from the dedicated students and the support of the community.

“This is the first year I have not gotten any upset emails, [and] have had a much better response for ticket sales and people wanting to know more about it. The reason why I do the play are eleven students who have helped me get to where we are,” Parnell said.

This semester’s last showing of the Vagina Monologues will be tonight at 7:00 p.m. at the Tarleton ballroom. Tickets cost $5.00 and can be ordered or reserved by phoning 254-698-0514 or emailing parnell@tarleton.edu