Tarleton celebrated 100 years of being merged with the Texas A&M University System with a centennial birthday bash that took place on Wednesday, Sep. 20 at Heritage Park in Stephenville.

According to tarleton.edu/centennial, the key players in the century-old drama were steadfast Tarleton President James F. Cox, the visionary head of Texas Agricultural and Mechanical College, President Dr. W.B. Bizzell, various local boosters, benefactors and staunch supporters. On Feb. 20, 1917, three-and-a-half years after Cox took over at Tarleton, the combined work on the campuses of the two schools, the Legislature and Stephenville as a whole, came to fruition.

“James F. Cox, President of John Tarleton College, realized the institution was struggling financially. He determined that Texas Agricultural and Mechanical College was a prospective partner…,” Brown said. “With local support, he approached Texas A&M President Dr. W. B. Bizzell, who resonated to the idea of Tarleton becoming a branch college… Cox and local community members raised money to buy 500 acres for a college farm and to restore the original Tarleton endowment to $75,000. That show of local support won the approval of both bodies and Tarleton’s affiliation with A&M began.” 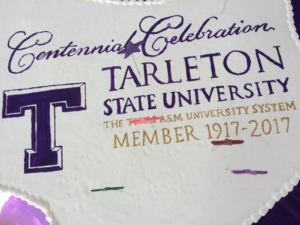 Tarleton celebrates its 100th birthday with a cake during the Centennial Birthday Bash on September 20th.
Photo by Ashley Inge

According to Tarleton’s press release about the event, Tarleton’s yearlong centennial celebration kicked off in January with the grand opening of a $3.8 million Agricultural Field Machinery and Fabrication Laboratory located on property originally donated to establish the university as part of the A&M System in 1917.

Brown also explained why Tarleton decided to merge with A&M in 1917.

“History tells us that John Tarleton College was facing financial difficulty and needed help to continue its mission. The college was using up its endowment to meet expenses. Revenue was not keeping up with expenses. Buildings were in bad repair, the library inadequate, and laboratory equipment, furniture and fixtures were ‘very poor,’ according to President Cox. Also, Texas A&M was the only Texas college with an agriculture-based curriculum that suited Tarleton’s rural environment,” Brown said.

According to Tarleton’s press release about the celebration, the highlight of Tarleton’s centennial celebration is a visit from the Texas A&M University System Board of Regents and top officials on Oct. 18 through 20, when they conduct their regular fall meeting on the Stephenville campus, and honor alumnus and military hero Maj. Gen. James Earl Rudder. Rudder became 16th president of Texas A&M University and third chancellor of the A&M System. Rudder will be honored with the dedication of a pedestrian mall and the unveiling of a life-size statue sculpted by Granbury artist and Tarleton Distinguished Alumnus, Mike Tabor.

“When I came to Tarleton in 1983, there was a saying that ‘Tarleton is the best kept secret of the A&M System.’ Well, I don’t believe we’re a secret any longer. Tarleton, with more than 70,000 alumni, satellite centers in Ft. Worth, Midlothian and Waco, National Championship Rodeo Teams, many Lone Star Conference Championships, State-of-the-Art academic facilities and a student body full of pride wearing their purple and white is enough to convince me that Tarleton is well on its way to being a premier student-focused university in Texas and beyond,” said Brown.