The Public Relations and Event Management (PREM) program at Tarleton State University is hosting the sixth annual Central Texas Wedding Expo on Feb. 28 from 1 – 5 p.m. The event will take place in the Thompson Student Center ballrooms. With the opportunity to meet new people, potentially build relationships and check out a number of trade show displays that businesses have to offer, hopefully, attendees can take a lot away from an expo like this.

It will be held in honor of Dr. Gay Wakefield, the expo’s founder and a Tarleton associate professor of communications, who died last month. 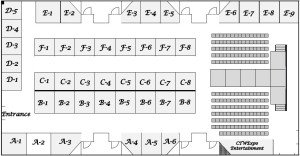 The sixth annual Central Texas Wedding Expo layout was created by the operations team, made up of Tarleton PREM students.
(Graphic courtesy of Lizzie Lempeotis and the PREM program)

Lizzie Lempeotis, a senior PREM major and the co-director of the expo, said there will be an honorary booth for Wakefield at the event to show their respect and thanks for what she has done for them in the past. She said there is a booth every year advertising the PREM program and their accomplishments, and the booth this year will honor the program’s founder and her dedication to its success.

“It’s going to have a slideshow of all PREM stuff that she’s been leading,” said Lempeotis. She said this includes the PREM program’s involvement in events with Design Industries Foundation Fighting AIDS, the Margarita Ball in Fort Worth, Clark Gardens Botanical Park in Weatherford, By Gone Days on the Bosque at the Stephenville Historical House Museum and numerous weddings all over the region.

Lempeotis also said that the honorary booth will have a pair of purple cowboy boots because cowboy boots “were her thing.” “I’m 90 percent sure I’ve never seen her in anything but cowboy boots,” she said.

Besides the honorary booth, 33 vendors will be represented at the event. Lempeotis said this surpasses the goal to have more than the 31 vendors that attended the event last year.

• The fifth annual Central Texas Wedding Expo in 2015 had record numbers that the PREM program put into an infographic for future vendors and attendees to view.
(Graphic courtesy of Lizzie Lempeotis and the PREM program)

Dr. Karley Goen, an assistant professor of communications at Tarleton and the interim director for the expo, said, “It’s basically student-run, student-led, so I’m just facilitating and being there as a sounding board, helping them kind of figure out and meander through all the legalities. We’re just troubleshooting and making sure everything is ready to go.”

The students have two teams working on the production of the event: the entertainment team and the operations team.

The fashion show is an event put on every year at the expo. A local vendor gets to showcase its styles and available outfits for grooms, brides, bridesmaids, ring bearers and flower girls. This year’s vendor for the fashion show is Gracie’s Bridal Shop. The show begins at 4:30 p.m.

Other than the fashion show, vendors and games, Goen said prizes will be raffled off, and the tickets will be sold at the entrance.

Lempeotis, Goen and Evans stressed the appreciation they have had for the entire university after their tough transition to carry on with the expo after Wakefield’s death. The three said that faculty, staff and students from various departments have stopped by the PREM lab to check and see if the team needed any help.

“Everyone passes by to check in and see if we’re doing okay and how to help,” said Lempeotis. “That’s been really nice. I don’t even know these people, and they’re helping us.”

Tickets for the expo are $5, but children 12 and under can attend for $2. It is a come-and-go event open to anyone who wishes to attend.

“I know a lot of people want to see this continue as Dr. Wakefield’s legacy. They didn’t want this to end when she passed away. They wanted to make sure it could blossom,” said Evans. “I’m really excited for this year’s expo. It’s going to be one of our best ones yet.”