Texas A&M University System Chancellor John Sharp says he would like to release information about the investigation of former Tarleton Vice President of Student Life Rusty Jergins, but he can’t without a change in state law.

“I think you’ll have to change the law to get that done,” Sharp said. “I would love to tell you exactly what happened because I can promise you that Tarleton is now better off because of that change.” 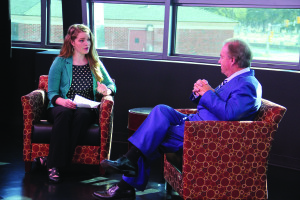 Sharp’s comments to Texan News came during a tour of the Tarleton campus last week. The university announced that Jergins is “no longer affiliated with Tarleton” the Friday before in a statement emailed to faculty and staff.

The Jergins investigation has been cloaked in secrecy since it began in early September. Texan News received an audio recording of a person being interviewed by one of the investigators. In the recording, the investigator said 20 to 25 people had already been interviewed.

Joni Baker, one of the two TAMUS investigators, said in the recording that the investigation is “very confidential and very tightly held.”

“We’re not telling anybody who we’ve interviewed or who said what about what or who or whatever,” Baker said. Baker was contacted at her office Tuesday afternoon and declined comment.

The person who provided the recording asked not to be identified.

Baker said that over the past four or five weeks, investigators talked to “many, many, many students, former students, employees, former employees. Pretty much everybody we can identify as possibly having some information or knowledge of what the allegations are.”

Two requests under the Texas Public Information Act for the records about the investigation were filed by Texan News, one with the system and one with Tarleton State University. The system general counsel’s office is seeking a decision from the Texas Attorney General on whether the records have to be released.

In his request for a ruling, system attorney R. Brooks Moore wrote:  “We believe that the requested information should be withheld from disclosure because the records were collected or produced by the System’s compliance program for the purpose of reviewing the compliance processes at Tarleton, a component institution of The Texas A&M.”

He also wrote that the investigation focused on “allegations of breach of standards of conduct/ethics reported anonymously to the Texas A&M University System regarding a Tarleton employee.”

Whether the results of the investigation will be released depend on the Attorney General’s response to this request, which will be made within the 45 business day limit.

An email statement sent to university faculty and staff from the president’s office on Nov. 7 states: “The system has completed its investigation and reported the findings to President F. Dominic Dottavio. Based upon these findings, the university has decided to make a leadership change.  Rusty Jergins is no longer affiliated with Tarleton State University, and thus, is no longer serving in the capacity as Vice President for Student Life.