SHAH ALAM, Malaysia (AP) — The estranged half brother of North Korea’s leader had about 1.4 times the lethal dosage of VX nerve agent on his face after he was attacked at a Malaysian airport, a government chemist testified Tuesday.

VX was found on Kim Jong Nam’s face, in his eye and in his blood plasma, Raja Subramaniam, who heads the Center of Chemical Weapons Analysis laboratory, said at the murder trial of two women accused of smearing the chemical weapon on Kim in the brazen assassination in February.

VX and related products were also detected on the clothes the women were wearing on the day of the attack. On Monday the trial moved temporarily to a high-security laboratory so the judge, attorneys and the defendants could examine the clothing before it was officially accepted as evidence.

Resuming his testimony Tuesday, Raja described VX’s lethal potential. He said animal studies showed the lethal dosage is 0.142 milligrams per kilogram of body weight, and that 50 percent of the tested population will die when exposed to this dosage on their skin.

Raja estimated the concentration on Kim’s facial skin was 0.2 milligram per kilogram of body weight.

Asked if this amount was enough to kill him, Raja said: “I can’t give a direct answer on this. Based on concentrate estimate, it is about 1.4 times the lethal dosage.”

He acknowledged that more of the poison might be needed to kill a heavier person but had no data on it.

He said the VX concentrate in Kim’s eye was estimated at only 0.03 milligrams per kilogram of his body weight, but that correlated to VX penetrating faster through the eye than through the skin. VX was also found on the collar and sleeves of Kim’s blazer, probably because he wiped his face on his blazer after the attack, Raja said. 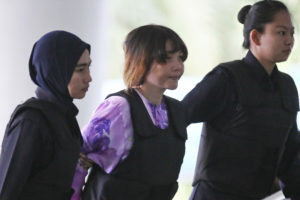 Vietnamese Doan Thi Huong, center, is escorted by police as she arrives for court hearing at Shah Alam court house in Shah Alam, outside Kuala Lumpur, Malaysia Tuesday, Oct. 10, 2017. Doan and Siti Aisyah of Indonesia, accused of killing the estranged half brother of North Korea’s leader, pleaded not guilty at the start of the trial last week to charges of murder that carry a mandatory death sentence if they are convicted. (AP Photo/Sadiq Asyraf)

The two defendants, Doan Thi Huong from Vietnam and Siti Aisyah from Indonesia, pleaded not guilty at the start of the trial last week to murder charges that carry a mandatory death sentence if they are convicted.

Raja’s finding of VX on the women’s clothing and on Huong’s fingernails was the first evidence linking VX to the two suspects. Their attorneys have said the women were duped by suspected North Korean agents into believing they were playing a harmless prank for a hidden camera TV show.

Under cross-examination, Raja said it wasn’t possible that the VX used to kill Kim was a “binary” concoction of two non-fatal elements because high temperature would have been required to create VX.

One item where Raja detected VX was not officially admitted as evidence in the case: the blazer Kim was wearing when he was attacked. Raja testified it was not available because police told him to return Kim’s personal belongings, including his blazer and bag, to North Korea.

Police officer Wan Azirul Nizam Che Wan Aziz, the chief investigating officer in the murder, told the court that an airport security video taken before the attack on Kim showed Huong softly wiping the face of another person at the same airport terminal, in what he described as a practice session for the attack on Kim. Huong then clasped her hands together and bowed her head as if she was apologizing before retreating slowly, he said.

However, a security video taken of the actual murder showed her being rough, “as if she was attacking” Kim, he said.

“To me, her action was quite aggressive,” Wan Azirul said, adding that Huong then retreated in haste.

Prosecutor Wan Shaharuddin Wan Ladin told reporters that the earlier video was taken on Feb 11, two days before the murder. He said prosecutors will show videos to the court on Wednesday of the two women carrying out the attack. 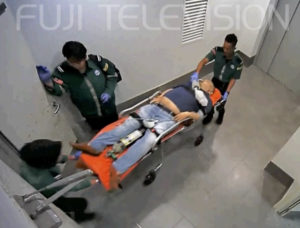 In this image made from Feb. 13, 2017, video provided by Fuji TV, Kim Jong Nam, half-brother of North Korean leader Kim Jong Un, is stretchered at Kuala Lumpur International Airport in Sepang, Malaysia. Japan’s Fuji TV broadcast on Sunday, Oct. 8, 2017, what it described as exclusive airport security videos showing an unconscious Kim being taken on a stretcher to an elevator. It said he was being taken to an ambulance to be transported to a hospital. Kim died on the way to the hospital. (Fuji TV via AP)

“We have an uphill battle in this case. We are the underdogs. They have the upper hand but we have our own strategy,” he told reporters.

VX is banned by an international treaty as a weapon of mass destruction but is believed to be part of North Korea’s chemical weapons arsenal.

Kim was the eldest son in the current generation of North Korea’s dynastic rulers but lived in virtual exile as an apparent family outcast. North Korea experts say he may have been killed because he was perceived as a threat to the nation’s current leader, Kim Jong Un.

An airport security video reviewed by The Associated Press on Monday shows what may be Kim’s final recorded moments of life after he fell perilously ill at the Kuala Lumpur airport. The video shows Kim apparently unconscious on a gurney and being given oxygen by medical attendants waiting for an elevator to take him to an ambulance.