Editor’s note: Texan News Service would like to congratulate Chief King on all of his hard work and dedication over the past 20 years. Thank you for helping to keep the city of Stephenville a safer place for everyone.

20 years ago on June 22, 1997, the city of Stephenville took in Chief of Police, Jason King, as a police officer for the Stephenville Police Department (PD). 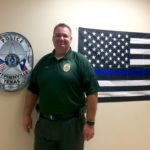 Chief King posing at the Stephenville Police Department. King says it doesn’t feel like 20 years have gone by at all. Photo by Latricia Powell

King, who grew up in the Rio Grande Valley on a farm in Donna, Texas, left for Stephenville shortly after graduating from Donna High School in 1991. King says he has always had a passion for law enforcement work as his father worked for the McAllen PD, Edinburg PD, and then retired after 20 years as a game warden for the Texas Parks and Wildlife department. His late grandfather also worked at the McAllen Police Department for 33 years.

He originally moved to Stephenville to attend Tarleton State University. He started doing ride-alongs with some Tarleton Police officers in 1992 and joined the Police Academy at Tarleton in early 1993. He was also a student worker for the Tarleton Police Department, doing escorts on campus, locking buildings, and other services. After graduating from the academy, King worked for Tarleton PD for a few years before getting hired by Stephenville PD in 1997. 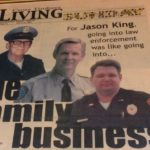 King is a 3rd generation police officer. In 2003, The Stephenville Empire-Tribune ran a story about King, his father and his grandfather’s careers in law enforcement. Photo by Latricia Powell

Chief King started out working as a patrol officer in the field and became a Shift Sergeant in August of 1999. In April 2002, he became a Lieutenant and supervised the uniform patrol division. He was promoted again in 2006 to Captain, and to Deputy Chief in 2014 before being appointed to Chief of Police in February of 2015. “I’ve enjoyed every aspect of it. Each position in the department presented its own rewards and its own challenges,” said King.

His favorite part of being Chief is the interaction he gets to have with people. “It’s my dream job, it really is. I’ve lived in Stephenville longer than I ever lived anywhere else. This became my hometown. I’m raising my family here, [and] my kids here. So to get to be the Chief of Police of what’s become your hometown, that’s pretty awesome,” he said. 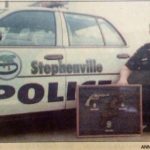 In the 2003 Empire-Tribune article, King is pictured as a Patrol Lieutenant displaying the badges and guns worn by the King men before him.

King says some aspects he likes the most about Stephenville PD are the people, professionalism, and culture of the department. He says the community they get to police in, as well as the support for law enforcement here in Stephenville, is something he and other officers really appreciate and enjoy. “We feel like we have a really good relationship with the community and we try to maintain that,” said King.

Aside from his busy life as Chief, he has a wife and three kids. King is also a member of the Cross Timbers Family Services, the Stephenville Optimist Club, and he serves on the board of the Star Council on Substance Abuse.

Chief King says that over the past 20 years, what’s most rewarding is watching all the people that came into the organization after him. “Watching them grow and being successful and maybe thinking you helped play some small part, that’s been rewarding to watch.”