Chris Kyle: The most lethal sniper in U.S. military history

A former Tarleton student who became the most lethal sniper in U.S. military history is now urging Americans in a New York Times best-seller to show “random acts of kindness“ for U.S. troops.

Chris Kyle, who studied ranch and range management at Tarleton in the early 1990s, also says he’d rather be known for the lives his marksmanship saved rather than his “kills.” 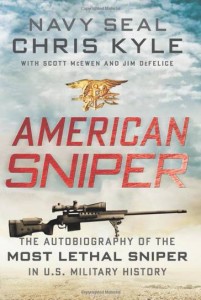 “Honestly, I really don’t care about it,” said Kyle, whose book, “American Sniper,” is at the top of a New York Times’ hardcover, non-fiction best-seller’s list.  “I mean, I would love it if I could have a tally and be known for the number of people I saved for having to do all of that.

“I don’t really care about the records and the medals. I was out there because I loved my job and loved the guys with me, and I just wanted everyone to come home.”

Kyle served as a Navy SEAL from 1999 to 2009. He was deployed four times in Iraq and fought in Ramadi, Fallujah, and Sadr City.  Kyle learned halfway through his deployment in 2006 that he had broken the record for the most confirmed kills in U.S. military history. The record was 109. Kyle had 160.

An interviewer for Time Magazine once asked Kyle if he was “blood-thirsty.”

“I signed up to go to war to protect my country,” he says. “As far as bloodthirsty, would you rather the Marines and soldiers die or that we kill the enemy?”

In his book, Kyle writes that his only “regrets are about the people [he] couldn’t save – Marines, soldiers, [his] buddies.”

“American Sniper” is written by Kyle and his wife, Taya, and with help from Scott McEwen and Jim DeFelice.

“This isn’t about my story and my experiences,” he says. “I am just trying to raise awareness so people look and see what [the soldiers] have to go through, what the families have to go through, and that way when you see the little ticker tape at the bottom of the TV screen that says ‘somebody else died today in Afghanistan.’ You stop and think, ‘Wow that could’ve been my neighbor.’ You start putting faces to these guys and show them respect.

“People are definitely doing a great job by saying ‘thank you’,” he says. “But I want people to go one step further and show thanks (with) random acts of kindness, like mowing their yards, babysitting, cooking a meal for them, or things that don’t even cost anything. Just a little bit of your time to show them thank you.”

Kyle takes his readers on a tour of his combat experiences, some of which, he acknowledges, may be hard for Americans to accept.

“Most Americans can’t take the reality of war, and the reports they sent back didn’t help us at all,” Kyle wrote.

Kyle says he enlisted his wife to help write the book in the hopes of telling a broader story than his own.

“I knew that if I just put [a book] out about a combat vet, that it’s only going to get a portion of the viewership, but if I throw in the wife and the family, then that’s going to get across a broader view. If I can get the broadest spectrum of people that I can then that’s what I want, because I want people to stop and think about it. You know, it’s not just the guy down there that’s going to war, but it’s the families that are at war too.”

For example, in one entry, Taya writes about the difficulties that the deployments put on their marriage and how it affected their relationship with each other.

“You miss them so much when they deploy, and you want them to be home, but then when they are, things aren’t perfect. And you feel as if they should be. Depending on the deployment and what I’d been through, I also had emotions ranging from sadness to anxiety to anger…There was a distance between us that neither one of us could really fix, or even talk about.”

Kyle now is the president of his own company, Craft International in Dallas, that gives sniper training for active duty military and law enforcement personnel, teaches them about tactics during battle, and also gives civilians training on weapon awareness.

Kyle says he’ll never forget fellow soldiers who died by his side.

“I lost some very close buddies, and it definitely affected me and it is something that will be with me for the rest of my life. Not just the buddies, but the guys I fought alongside. You know, the Marines and soldiers that I saw die or held in my arms while they died. It’s something that you’ll never forget, and it’ll always be with me.”

And he counts himself lucky to have survived.

“When people ask me how the war changed me, I tell them that the biggest thing has to do with my perspective,” Kyle wrote, “You know all the everyday things that stress you here? I don’t give a sh– about them. There are bigger and worse things that could happen than to have this tiny little problem wreck your life, or even your day. I’ve seen them. More, I’ve lived them.”