On April 17, Tarleton State University hosted its first-ever civic expo and Texan Debate on gun control. The daylong event kicked off with the expo on gun control held near the amphitheater outside of the Humanities Building. The expo gave student organizations the opportunity to explain facts on various aspects of gun control. This year’s Texan Debate and expo is the first ever, but Dean Kelli Styron of the College of Liberal and Fine Arts, said it will be the first of many.

“It’s our first year and we hope to grow it every year,” said Styron.

Styron went on to explain what exactly students could do at the expo. “They can come through the booths and learn facts about gun ownership, facts about gun policy, they can ask questions. There are lot[s] of different venues to be able to learn different things that each group has put together.”

The expo had a carnival style theme. Every booth had a mini-game that went along with the facts that each organization was presenting. Shooting galleries, mini basketball free-throws and even pin the ribbon on the duck were just a few that added a fun element to the informative expo. 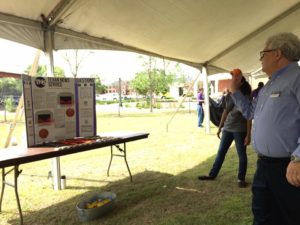 Dr. Howard shows off his basketball skills at the Texan News booth. Photo by Arynn Tomson

“We are here to start the conversation about guns in general,” said Dr. Jennifer Edwards, assistant vice president of Student Success and Multicultural Initiative. Edwards says gun control is “a subject that people don’t like talking about because people are usually on one side or the other. So this is a fun way to really talk about it. It’s such a tense topic but it’s something that definitely needs to be discussed.”

While this year’s debate focused on gun control, Edwards went on to say that it was a perfect time to talk about gun control due to the recent court ruling that allowed concealed carry on public university and college campuses in Texas—including in dormitories.

“It’s something that definitely needs to be discussed especially in light of the state legislative sessions and then, the federal government decisions as well,” said Edwards.

Christian Rocha, senior and member of Tarleton’s Texas Social Media Research Institute, explained what she expected the school and student body to get out of the debate.

“[What] I’m expecting to get out of it is just about being able to talk about guns more openly, and hopefully students will be able to have a conversation and listen to each other’s opinion and not just be stuck, if anything, in their own ways and be able to listen to other people’s opinions about anything in the future.”

Edwards and Rocha agreed that the goal of the debate was communication between students.

“It’s definitely important to realize how to communicate with someone who does not share your view on certain subjects, such as guns. Like, Christian (Rocha) and I don’t know if we agree or disagree. We could or could not, but to know that we can start that civil conversation is really important especially as people start to transition to the work force,” said Edwards.