Tarleton State University’s men’s and women’s club soccer teams are ready to put their organization in full swing this fall semester by competing in the Texas Collegiate Soccer League, which consists of Division I universities.

Brendan Sar, president and founder, formed the club soccer teams in September 2014. With a love for the game, Sar started the organization by using a Facebook page to communicate with others who were interested in playing together.

“I was going to go and play soccer at another school, but with being so involved on campus, I thought, ‘Might as well bring the sport here,’” Sar said.

In previous semesters, the club team has only played in scrimmages with rivals UT Dallas and Texas A&M. With a more established organization, the club is ready to take on these Division I teams as the underdogs. 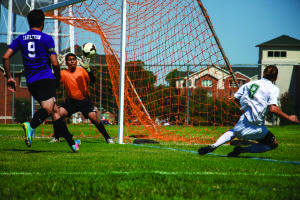 Juan Munoz, 00, the keeper for the Tarleton State Club Soccer team, saves his team from a screamer coming from the UNT forward on Sept. 12.
(Photo by Cameron Cook)

As one of the newest club soccer teams, the group has already had accomplishments, such as competing in the Texas Collegiate Soccer League and finishing first. The club is establishing itself publicly by getting the word out about who they are and branding themselves with their own logo.

Sar integrates the love of the game and winning, but the club works on exposure, especially with their push to become an official NCAA team in the future. They want the school and the city to know they represent them as a whole.

“If we get enough exposure, start winning, and the school feels that they have a need for soccer and the community is really supporting us, then Tarleton will hop right on board. But, of course, it is a work in progress,” Sar said.

The organization is player-captain run by two women captains, Amanda Kleifgen and Alexandra Deitrick, and two men captains, Brandon Waggoner and Armando Monrreal. Sary and Denver Green oversee the teams. They focus on the club on and off the field, holding meetings to discuss practices and what they need to work on.

“I really give a lot of praise to Brenden, because he is really involved on campus, but he has put his heart and soul in this team, and it wouldn’t be successful without him. He does so much for us, and all the players want to be there to support him,” Deitrick said.

All the captains contribute to the teams in different ways, whether it is working on team cohesion or pushing teammates to work harder. The teams work mainly on player chemistry since they have a lot of fresh faces.

“With it being a pass-first-game, we need a lot of trust on the field,” Sar said, “And being a European first-pass-style, it’s scary because you pass back to the goal keeper, and you have to have that trust.”

The players already started building relationships by joking on the field and hanging out after practice. Off the field, the players work on building that trust, whether by going to lunch together or goofing off in a group text.

Monrreal said, “Being a captain feels a lot like being a big brother.”

Waggoner added, “I see myself as a leader. Someone has to get the job done. [It] might as well be me.”

Players on the team not only represent Tarleton but Stephenville as a whole. The club team supports local soccer and is planning on entering a game hand-in-hand with kids from the Stephenville Soccer Association.

“With the international aspect, we are getting a lot more foreign students coming in, and soccer is a language of its own. You can get a group that doesn’t know how to talk to each other, but you give them a soccer ball and go out to play. It’s way different, and they communicate like crazy,” Monrreal said.

The club soccer team has evolved so much compared to the time when Tarleton only had soccer intramurals once a year. Now, in the spring, they even play in an indoor league. The team hopes to end the season with a winning record to reflect all their hard work.

Sar said, “We come willing to play and know that we are determined to pursue NCAA. I believe we can put up some really good competition and be that underdog that puts up a good fight. And just the determination of the team—even if it’s a loss, these guys, I’ve seen them at practice. They keep getting up and going.”

The club team is always looking for fresh talent. For those interested in club soccer, the team is are always willing to hold a tryout for an evaluation.