Coach Ronnie Hearne retired at a press conference held early Wednesday morning. Hearne will be replaced by Misty Wilson, who was on his staff with him his entire stay at Tarleton.

Athletics Director Lonn Reisman reflected on when they met Hearne to interview him and spoke of the highlights of Hearne’s career at Tarleton. Some of the career highlights for Hearne include winning more than 200 games for the TexAnns and winning more than one thousand games in his coaching career.

When Hearne got to the podium, he spoke about how, during his interview, there was a room of around five people, but now that he is retiring, the gym is full. Bringing some humor 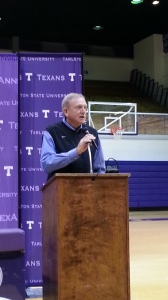 As far as accomplishments at Tarleton, the list is long for Hearne. He was there for many of the firsts in TexAnn history. Hearne was able to lead the TexAnns to their first regular season and LSC Tournament Championship in 2012. Hearne was also the first coach to take the TexAnns into the NCAA Regional Tournament, getting there six out of the eleven seasons during his time at Tarleton. Hearne got to the championship game in the LSC Tournament twice during his tenure and won once.

Hearne also saw some of the best talent to come through Tarleton as he coached Kiara Wright, Shelby Adamson, Katie Crawford and JoAnne Jones, who are some of the all-time greats in Tarleton history. Wright is the school’s all-time leader in points for Tarleton, Adamson was a two-time LSC Academic Player of the Year, Crawford won 2007 LSC Defensive Player of the Year and Jones has the second most rebounds in NCAA school history with 636 boards.

Hearne’s replacement, Coach Misty Wilson, played for the TexAnns from 1998 to 2002, scoring over 1,400 points for the team and making her seventh all-time for the school. Wilson was a part of 219 wins while on Hearne’s staff and has a bachelor’s and master’s degree from Tarleton in Exercise and Sports Studies.

Wilson said she is excited to continue Hearne’s legacy for the program while recruiting girls that have good character both on and off the court.

If you’re soon to be retiring, you might want to have a look into the top 9 retirement considerations and figure out if you can retire in your current position or if it may be wiser to hold off for a little longer.