GOLDEN, Colo. — A Colorado teen charged with kidnapping and killing a 10-year-old girl pleaded guilty Tuesday to all 15 charges against him, against the advice of his attorneys.

Austin Sigg, 18, could be sent to prison for the rest of his life for the slaying of Jessica Ridgeway in Westminster nearly a year ago. Jessica was abducted while walking to school, and her disappearance panicked thousands of residents in Denver’s western suburbs. 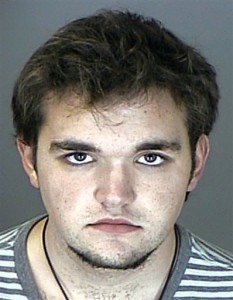 This booking photo released by the Westminster, Colo., Police Department shows Austin Reed Sigg. There could be a plea deal for Sigg, a teen charged with kidnapping and killing a 10-year-old girl on her way to school in suburban Denver. A hearing to discuss a possible plea deal was scheduled for Tuesday Oct. 1, 2013. (AP Photo/Westminster Police Department, file)

Sigg also pleaded guilty Tuesday to a May 2012 attack on a 22-year-old jogger at a lake in Jessica’s neighborhood.

Prosecutors said Sigg entered the pleas because of overwhelming evidence against him. His trial would have started Thursday.

“The writing was on the wall,” Jefferson County District Attorney Peter Weir said after the hearing.

Sigg faces a minimum sentence of 40 years in prison with the possibility of parole afterward when he is sentenced after a hearing starting Nov. 18. Prosecutors asked Judge Stephen Munsinger to impose consecutive sentences on some of the other charges so Sigg spends the rest of his life behind bars. Sigg’s lawyers argue the law doesn’t allow that.

Sigg cannot face the death penalty because he was 17 at the time of the slaying.

“In this case, there has been justice for Jessica,” Weir said.

Defense attorney Mitch Ahnstedt told the court that Sigg was entering the pleas against his lawyers’ counsel but he didn’t explain why.

Sigg’s father, Rob Sigg, said in a statement that he was thankful that the Ridgeway family would be spared the ordeal of a trial.

“We ask the community to continue to support the Ridgeway family and keep them in your thoughts and prayers,” he said.

The families of both Jessica and Sigg were in the courtroom Tuesday. Sigg spoke only to answer the judge’s questions about whether he understood what he was agreeing to.

After Sigg pleaded guilty, prosecutor Hal Sargent started to describe how Sigg grabbed Jessica, pulled her into his car and tied up her hands and feet, leading Jessica’s mother, Sarah Ridgeway, to leave the courtroom. Munsinger stopped him after defense attorneys objected, saying they weren’t disputing the evidence.

Jessica, a fifth-grader who loved purple and performing in a peewee cheerleading squad, left home to walk to school in Westminster on Oct. 5, 2012. She never arrived.

Hundreds of people helped search for her. Jessica’s backpack was found two days later in Superior, a town about 6 miles from her home. Days after that, human remains later identified as Jessica’s were found in a park.

Authorities, meanwhile, urged residents to watch for any suspicious changes in neighbors’ behavior. Officers guarded crosswalks and photographed cars in the area. Parents escorted their children to and from area schools. Mailboxes and trees were encircled by ribbons in Jessica’s favorite color, purple.

On Oct. 19, 2012, a resident contacted authorities to alert them to Sigg because he reportedly had a fascination with death, Westminster police Detective Luis Lopez testified at a preliminary hearing. FBI agents took a DNA sample from Sigg.

Investigators said Sigg told them some of Jessica’s remains were hidden in a crawl space in his mother’s home, where he lived. They said Sigg described how he abducted Jessica as she walked past his car. He said he bound her arms and her legs, drove around for a little bit, then took her to his house.

Sigg dropped out of high school after the 11th grade and later earned a graduate equivalency diploma. Former classmates say he was intelligent but complained about school and was bullied for having a high voice.

When asked about his criminal record on the 911 call, Sigg told the dispatcher: “The only other thing that I have done was the Ketner Lake incident where the woman got attacked. That was me.”

In the attack on the jogger, investigator Michael Lynch testified that Sigg used homemade chloroform to attempt to subdue the woman. She escaped.