But it was a comedy, Cam Rich’s short film “Game of Chess,” that won the coveted “Best of Fest” award. The film featured a word-by-word visual representation of an excerpt from long-time comedian Bill Cosby’s 2013 standup act, “Far From Finished.”

The entry drew laughs from the audience and earned the winning filmmaker a trophy as well as his professor’s praise.

“That student worked every minute of class time, 75 minutes twice a week, and then multiple hours on his own to do a two minute film,” said Dr. Robert Anderson, assistant professor of Communication Studies and adviser. “That film took, I would say, 300 hours of work.”

Anderson’s Honors Foreign Film class judged all of the entries the Tuesday before the event held in the O.A. Grant Humanities Building. He said the judges had a difficult time choosing a winner from the diverse group of films presented.

“The students have a completely different rubric for grading than I do,” said Anderson. “They want to be entertained.” 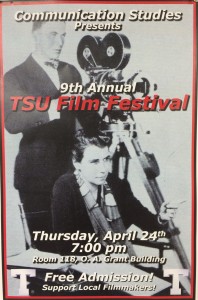 The films covered many different styles, including comedy, horror, romance, animation, light photography, and frame-by-frame. Runtimes also varied, with several films only a minute long and the longest lasting 18 minutes.

However, a shorter film does not necessarily mean less work on the part of the student filmmakers, Anderson noted.

“There is no correlation between running length and the time taken to do it,” he explained.

The event has grown significantly since it began. The festival originally was put together by Dr. Charles Howard, head of the Department of Communication Studies. Anderson has run it since its second year.

The number of judges for the film also grew to 19, almost double the largest number the festival has ever had.

Entries were not limited to those in his Anderson’s Digital Video Production class, but open to all students. Some students even entered multiple films in the festival.

Anderson, who had a career in Hollywood before teaching, said the entries’ overall quality impressed him.

“The films are very good this year — particularly good across the board,” he said.