A Sons of Confederate Veterans Commander who called for a Tarleton State University history professor to be fired is now saying he retracts that demand.

This comes after Dr.  Michael Landis, a Tarleton history professor, was featured in an article from Hood County News about Granbury’s Confederate history. In the article, Landis described celebrating the Confederacy as a “devotion to white supremacy and the Lost Cause.” 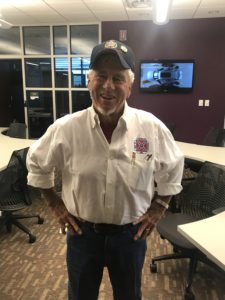 Freeman is the Commander of the Sons of Confederate Veterans in Granbury. Photo by Quanecia Fraser

Richard Freeman is the Commander of the Sons of Confederate Veterans Camp H.B. Granbury #427 chapter. Freeman wrote a letter to Tarleton State University’s office of the president, demanding that Landis be dismissed from his position as a history professor.

“As I told your university president, you need to be dismissed immediately,” Freeman wrote in another letter that was sent to Landis. “You are a complete fraud!  You have no business even being around students, much less calling yourself a professor of ‘history’.”

In the letter to President Dominic Dottavio’s office, Freeman called for the university to “DISMISS him from your staff… For the good of your university and students, immediate action should be taken by you or your trustees.”

Landis says he is amused by a demand that he be fired. He also says he is not surprised, because academia has faced scrutiny from similar groups.

“Not only [do] Neo-Confederates talk like this, many groups– a lot of them– are waging wars against universities right now. This is the kind of language they use. They say we corrupt the youth,” Landis explained.

In the last paragraph of the letter to Landis, Freeman wrote:

“If you continue as an educator, you need to at least stop corrupting students with your BS that you reported to the Hood County News.”

That “’facts’ documents” can be found here: http://bit.ly/2xjEj7H

Landis said he read the documents which include Freeman’s ‘facts’ sheet, but found nothing compelling about it.

“All of it’s just a bunch of nonsense,” said Landis. “He wants me to teach the Neo-Confederate version of American history… These people are not interested in actual facts. They want a version of reality that serves their purpose.” 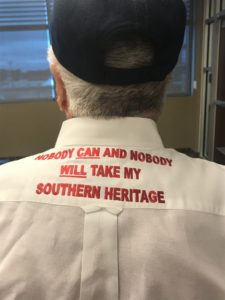 Freeman says he “believes” in what is written on the back of his shirt. Photo by Quanecia Fraser

In a recent interview with Texan News, Freeman retracted his demand that Landis be fired.

Freeman says he no longer thinks Landis should be fired, but is still upset about the comments he made in the Hood County News interview.

“My feelings when I wrote that were a little bit different than they are today,” he said.

“That letter was a little bit harsh and I realize that. I am a professional person. I take pride in that,” he began. “But, we [Sons and Daughters of Confederate Veterans] are going through a tremendous amount of problems right now… because the statues, the monuments and everything being torn down, and it is purely based on false history.”

Regarding Landis’ comments, Freeman said, “It’s statements like this right here that are causing the problems in this country.”

On the subject of racism, Freeman insists, “It didn’t have anything to do with the Confederacy.”

Freeman said he is not representing the organization, but his own beliefs. Photo by Quanecia Fraser

Despite him wearing a ‘Sons of Confederate Veterans’ hat during the interview, Freeman said that he is not representing the organization, but his own beliefs.

“I have several books, one of them titled… ‘Slavery was not the cause of the war’ and it’s a tremendously accurate book,” said Freeman.

Regarding how he knew the book was accurate, Freeman responded by asking, “Well, how does he [Landis] know his books are correct?”

Freeman says he would “like for Professor Landis to provide one factual document—notice I said factual document– that proves slavery was the reason the Union fired on the South in 1861.”

Freeman also said that he no longer wishes to meet with Dottavio and Landis, but will gladly meet with them if they request to meet for a discussion.

At the time of the interview, Freeman said the office of the president has not responded to his letter requesting that Landis be terminated.