April is Texas Confederate History Month and Confederate flags once again are flying at West End Cemetery across from Tarleton State University.

Every April, members of the Sons and Daughters of the Confederacy visit Erath County’s cemeteries and place Confederate flags on the graves of veterans who fought for the South during the Civil War.

Because the West End cemetery is on Lillian Street across from the planned new entrance to Tarleton, the flags concern some people on campus who see them as a symbol of racism and slavery. Others, though, view the flag as a symbol of Southern heritage and its display as a First Amendment right.

The flag issue goes way beyond Tarleton and Stephenville. A statewide and national debate is taking place as a case involving the flag has gone all the way to the U.S. Supreme Court.

The Texas Department of Motor Vehicles recently denied a request from the Sons of Confederate Veterans to create a specialty license plate displaying the plate number along with the Confederate battle flag. The group challenged the decision and a district court found in favor of the DMV. But an appeals court overturned the decision. 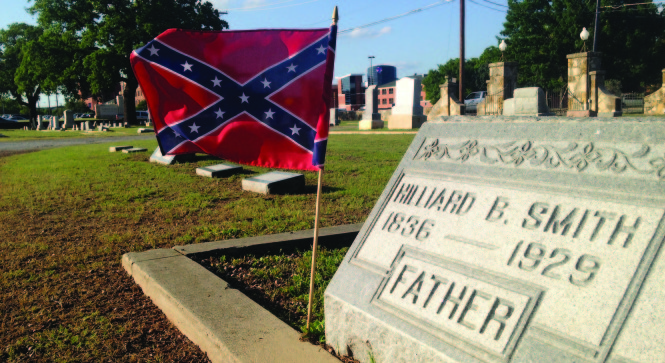 Every April Confederate flags are placed in the cemetery across from campus.
(Photo by Denise Harroff, Texan News Service)

The Supreme Court now is considering the case and is expected to make a ruling by late June.

Texan News interviewed several dozen Stephenville residents and Tarleton students about the license plate controversy and the West End cemetery’s display of Confederate flags. The majority of those interviewed had no objection to the flags at the cemetery – including some African-American students.

“I don’t find the flags offensive,” said Allie Goodwin, a sophomore nursing major. “I know who I am and my heritage as an African-American. I was raised that in your life there are going to be things that you witness, that you may not like, but don’t let it bother you. As long as it doesn’t get in your way of going to school and enjoying life, then let it go.”

But she and other students did not favor displaying the flag on license plates.

“If people are already having problems with the flag, why cause another problem by putting it on license plates?” Goodwin asked. “This will only cause an uproar to the people that are offended. The people who want the flag on their license plate might use it as Southern heritage, but to others that are driving up behind them might not see it as that. Why? Because the world is still caught up on racism.”

Another Tarleton student, Sidney Bustamante, a junior agricultural services and development major, echoed the opinion that the flag should not be allowed on specialty license plates.

“I believe that it’s morally wrong,” Bustamante said. “Although individuals are all raised differently, I think that unless an individual has direct relation to the Confederate soldiers, the flag [on the license plate] should not be in use. It is not OK to dictate what is and is not allowed, but it is also not OK to parade around ignorant ideals.”

Others such as Brock Longcrier, a sophomore at Tarleton, said he believed the flag is a symbol of Southern heritage “because there is more that was fought for in the Civil War than just slavery.”

“It’s like saying the American flag should stand for dishonesty and corruption because of the scandals the American government has been involved in,” he continued. “But nobody in the U.S. looks at the flag as a symbol of those things because we unite ourselves over the good qualities of this country.”

“I think of the flag as Southern heritage, not racist,” she said. “It was originally meant to represent the South, not represent slavery. I don’t have a problem with people buying rebel flag products from places like VisionBedding.com, it’s not racist it’s just Southern heritage.” 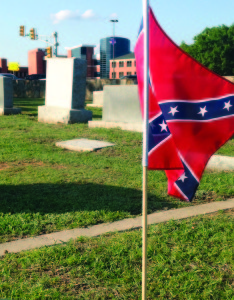 “Just because some people ignorantly correlate the Confederate flag to slavery doesn’t mean that is what the flag symbolizes or represents,” Neely said. “Just like the Nazis turned the swastika into an evil symbol, it originally didn’t represent” that.

Caitlin Hullum, a freshman criminal justice major, said while she doesn’t view the flag as a racist symbol, “I do have some friends and classmates that do. The Confederate flag is perceived different ways by different people.”

She was among the majority of students interviewed who said they did not believe the sight of the flags would deter prospective students from attending Tarleton.

“I don’t think they (the flags) will really mess with any numbers,” Hullum said. “You should be choosing your future school based on more important factors than the Confederate flags that are flying in a cemetery across from the school. It’s not like the flags are on the actual campus.”

“If you don’t want prospective students to see the flags, then move where you’re planning to put the new main entrance,” he said. “Those gravestones were there first and these people have been expressing their honor in this way for years.”

Putting flags on graves of fallen soldiers is different because they fought in the war, said Jazz Mangham, an agricultural communications major.

“If the families of the deceased buried there want to fly flags and represent their membership to the Sons and Daughters of the Confederacy, then they have a right to,” added Madison Teal, who is studying biomedical science.

The issue of free speech also comes up concerning the license plate debate as well as the flag display at the graveyard.

“I believe in the First Amendment and that we should not be censored in any way,” Stephenville resident Clint Barber said. “Both of these issues are just another example of political correctness taken way too far.”

When Kathryn Jones, a special education major, was asked whether she thought it was acceptable for the flags and the license plates to be denied, she said, “No, because the government cannot tell us what we should do when it comes to expressing ourselves.”

“I think people should have freedom of speech even when it can turn into a controversial subject,” she added.

Donna Hendrix, an administrative assistant in the psychology and counseling department, said, “We are all entitled to free speech. I don’t think it’s my job to tell them how to feel.”

“It’s a part of history and you can’t do away with history,” Hendrix went on to say. “It’s like the people fly the POW flag for Vietnam and the same for the people to fly the Confederate flag for people who fought in the Confederacy. What happened in the past is there and you can’t change it. People need to accept the fact and get over it. Get over it and live in today.”

Many interviewed blamed the media for blowing the issue out of proportion. The controversial subject has been discussed on media outlets such as U.S. News, CBS News, Fox News, National Public Radio, and Huffington Post.

Others said “political correctness” has gotten out of hand.

“I believe in the First Amendment and that we not be censored in any way,” Barber said. “Both of these issues are just another example of political correctness taken way too far.”

Goodwin summed up the concerns about new Tarleton students seeing the Confederate flags by saying, “I feel that if the prospective students have done their research and are mature, then seeing the flags at the cemetery will not bother them. Those flags are not getting in the way of their schooling, and within a couple of weeks they will have forgotten about the flags.”