At 5:39 p.m. today, a mass email and text messages from Code Purple notified Tarleton students and staff of a gas leak at the intersection of Lillian and Shirley streets. Everyone near the leak-in University Village, Heritage Hall, and Legacy Hall-were asked to “evacuate south to the Thompson Student Center.”

North Lillian Street was blocked on one end by Patrol Sergeant Cristino DeLeon and on the other end by a police car with flashing lights. The construction crew was working to repair the damages, and pedestrians were asked not to get any closer.
Photo by Denise Harroff

Patrol Sergeant Cristino DeLeon, a university officer, was down the road from the leak, informing passers-by of the situation and asking them to stay away from the area.

DeLeon said that the “major gas line that’s been busted” was due to “the construction crew.”

“These things happen,” he said.

DeLeon said that the people in the residence halls and nearby apartments were told to leave and head to the student center, but some chose not to.

“It’s been a mandatory evacuation, but we’ve had some students in University Village that, I guess, decided they didn’t want to evacuate. But we’ve evacuated Heritage, and we’re not allowing any pedestrians in through here,” he said when referring to the area of North Lillian on campus that is blocked-off by barriers.

At 6:38 p.m., another mass email and text was sent-out via Code Purple, letting the Tarleton community know that there was a crew on the scene repairing the leak. The message also said that “those who have evacuated should remain so until an all-clear is received through Code Purple.”

The construction crew was at the scene, standing around the area, working to resolve the issue. DeLeon said that the crew was planning to close-off the gas line. It is important that those who know how to run a gas line underground are in charge of ensuring everything is fixed properly. 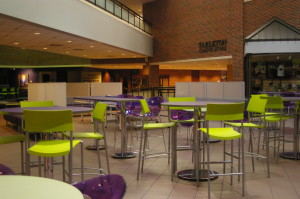 The Barry B. Thompson Student Center was hardly occupied after being labeled the site for evacuees.
Photo by Denise Harroff

“They said they’re gonna’ pinch the line off on both ends,” he said.

The student center, the area designated for people who evacuated, was bare. There were only a handful of students in the building. However, people could be seen walking in front of Legacy Hall and Legends Hall. A group of students were also gathered at a picnic table between the dining hall and Heritage Hall, just down the road from where DeLeon was directing pedestrians.

Code Purple will send-out another mass message when the area is clean and evacuees may safely return.

A Code Purple message was sent to the Tarleton community at 10:21 p.m. It said that the leak was repaired, and the evacuees were in the clear to return home safely.