Corps of Cadets reestablishes status and history at Tarleton

The Corps of Cadets program has been on hiatus at Tarleton State University since the 1950s. But Mayor Kenny Weldon, the colonel commandant of Tarleton’s Corps of Cadets, has had the program in full swing since Aug. 17. The cadets will have new uniforms, their own living and learning space and much more involvement planned for this fall.

“It’s a tremendous honor to be able to bring the program back to its status at Tarleton,” Weldon said .

Weldon said the Corps of Cadets began at Tarleton when the university joined the Texas A&M University System in 1917, establishing a deep-rooted history and heritage at the university.

Weldon said the Corps of Cadet’s ultimate goal is to achieve participation from 5 percent of the student population on the Stephenville campus.

“The core is student-led and is a very unique four-year experience of learning what your capabilities and strengths are as a leader,” Weldon said. 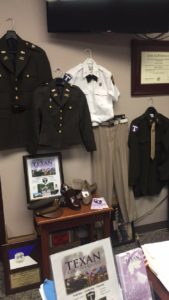 The Corps of Cadet’s male and female uniforms will be seen this semester on campus.
Photo by Rebecca Hernandez, Texan News.

Ron Henry, Assistant Commandant of the Corps of Cadets, said, “We have currently enrolled approximately 100 in the fall and one-third of enrollment is female.”

This year Weldon and Henry plan for future participation on and off campus from the Corps of Cadets. Programs that traditionally were ROTC (Reserve Officer’s Training Corps) programs, the Corps will be involved in organizing events such as silver taps and military appreciation.

“We are adding events to the Corps of Cadets. There will be a flag raising ceremony Saturday (27th of August) (at) the end of transition week, and Mrs. Towns (director of transition and family relations) will have all freshman sign a Tarleton flag [with] their name on it,” Weldon said.

Weldon said later in the semester the Corps of Cadets are planning on having a retreat ceremony. During this ceremony, the Corps of Cadets will lower the American flag to honor it on the Stephenville campus. Weldon also said they are going to bring back the Wainwright rifle drill team in full swing.

“Alumni in the Corps back in the 50’s and 60’s are very excited to see a part of what Tarleton meant to them come back to life,” Weldon said.

Weldon briefly explained the importance of the ROTC program as well as the difference between it and the Corps of Cadets.

“It’s important to understand that the ROTC program at Tarleton started in 1917 and has never gone away. What we are doing is actually opening Corps of Cadets up for students to participate in more like a student organization, that may or may not want to pursue a military career,” Weldon said.

Weldon said the Corps of Cadet’s required coursework will include an 18-hour curriculum of leadership roles, personal leadership, leadership theories and future professional experiences. Weldon said those who participate in this opportunity would receive a minor in leadership studies. 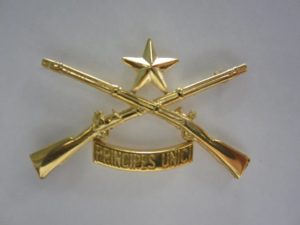 Weldon said housing is available for Corps of Cadets in a living and learning community in the new residence hall, Traditions South.

“The Corps is a living and learning community for leadership and character development. It’s not here for people to serve in the military. It’s here for students to understand and develop themselves as leader,” Weldon said.

Last semester the Cadets participated in a trial run, trying on different uniforms to see which fit and design worked best for them and Tarleton.

“Our original uniforms were uniforms we got from A&M. That’s part of our heritage. We are bringing back uniforms similar to A&M’s and in many ways that are different but unique to Tarleton,” Weldon said.

Henry said he strongly encourages those who share an interest in the Corps of Cadets to contact to them “to have a better understanding about what the Corps is about.” Applications are available online for the Corps of Cadets at http://www.tarleton.edu/cadets/documents/application_jtla.pdf.

“The core will help develop you and help you seek out a profession, we reinforce that you see it through,” Henry said.