Cracking down on crime at LJT 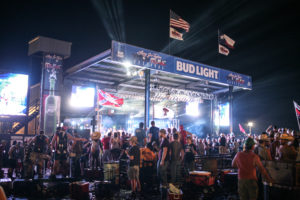 This year, rather than randomly walking around festival grounds, officers are assigned to districts that they will patrol. Photo by Cameron Cook.

In 2016, 32 people were jailed on charges ranging from public intoxication and DWI to fighting and drug possession, according to arrest records obtained under the Texas Public Information Act. The records indicated that only six of those arrested in 2016 were Tarleton students.

More disturbing, violent crimes that may have taken place at the event weren’t reported until after it was over or they weren’t reported at all, Erath County Sheriff Matt Coates said in an interview.

Coates said two people reported being sexually assaulted at last year’s festival. Both, however, waited until the festival was over to report what happened and reported it first to a hospital. Coates said the cases were eventually determined to be unfounded, which means not enough evidence was presented or the person decided not to press charges.

“Out of the 60,000 people that are there, I have feeling like there’s a lot more than two sexual assaults,” the sheriff said. “The [victims] blame themselves and that’s the heart-breaking part to me. No one asks for their camper to be broken into or to be sexually assaulted.”

When victims wait to report such crimes, it makes it more difficult to make and prosecute a case.

“It really deteriorates our ability to help if they wait that long because evidence is gone,” Coates explained.

Each year, 40 Erath County police officers work during the festival along with 60 bouncers throughout the week, said Coates. Coates also mentioned that at least 30 police officers are present during the event at all times and they patrol the area both on foot and in motorized vehicles.

According to the crime reports, the number of offenses that occur at Larry Joe Taylor’s Texas Music Festival increased from 22 reported incidents in 2008 to 32 in 2016.

In 2016, all of the incidents reported were either alcohol- or drug-related except for two instances of fighting. Some examples of the offenses reported in 2016 include a man caught in the middle of the road claiming he was Jesus, a man passed out in a portable restroom, another found lying on a guardrail near FM 3025 and one individual caught punching a truck in the parking lot.

“The Taylors have asked specifically for security to crack down on minors,” Coates said.

This year, for the first time, Coates says the sheriff’s department has designated two officers specifically for this issue who will check identification during the festival and to prevent under-age drinking. The highway patrol officers will also be increasing patrols around the festival to cut down on DWIs, according to Coates.

In recent years, officers would randomly walk around the festival grounds. This year, however, Coates said “our tactics are changing.” The festival grounds have been divided into districts and “each officer will have a district that they are assigned to.”

Most of the officers will patrol the main stage area, campgrounds, entrances, food and merchandise stands and other areas. Coates said he hopes this new tactic will prove more effective in helping to keep everyone just a little bit safer.

During the festival, when police officers aren’t watching the crowds, approximately 60 bouncers in the crowd and 20 outside the crowd patrol the campgrounds and the parking lot, according to Coates.

During the week of LJT, the Texas Department of Public Safety sends between 10-15 people to patrol the roads surrounding Melody Mountain Ranch.

“Our focus is to get intoxicated drivers off the street so they don’t kill themselves or others,” Coates said.

But he added that the county’s biggest challenge is “the sheer number of people, trying to keep them contained and safe. It’s a very hectic week. There’s never enough of us. There never is.” 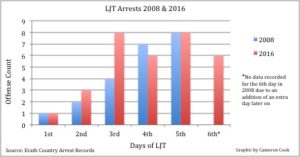 Coates says it would be nearly impossible to catch everyone who is publically intoxicated. The law enforcement team at the festival focuses on keeping everyone safe.

“We try to be as lenient as we can, as long as they are of age,” Coates said. “We try and keep everyone safe.”

If someone shows signs of public intoxication, Coates says officers will take the person to their police “command center” on the festival grounds where a medical team is standing by in case of emergency.

Coates also said officers are not able to arrest everyone suspected of public intoxication.

“If they’re being belligerent, then jail is probably where they need to be. If we throw everyone who comes through in jail, we’d be full after one day,” Coates said.

The reporters who wrote this story contacted the LJT Festival office for comment, but did not receive a response in time for publication.