Head cross country coach Pat Ponder is looking towards the future as he enters his tenth season at Tarleton State University.

Ponder is coming off of a historic 2015 season in which his team won Tarleton’s first ever Women’s Cross Country Lone Star Conference Championship, including the individual title from national qualifying senior runner, Aly Coughlin.

Runner Katelin Huckabee said, “We’ve made goals, we’re working constantly and we want to hold our title as conference championship.” 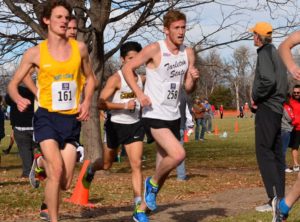 Ponder said, “Our goals for this season are to repeat as LSC national champions and send even more runners to the national championship.” Although the team is now without Coughlin, Ponder talked about leadership within his squads.

“We’ve got good leadership on both sides with Katelin and Peyton Heinig. I think they’re leading the team well…and by the time the conference championship rolls around, I think we’ll be ready,” Ponder said.

Ponder’s athletes have had much success on the cross country course, but even more success in the classroom.

The Lone Star Conference recognized Tarleton runners for their academic achievements as well. In the conferences, academic runner of the year was awarded to Tye Doty for the men’s team, and Coughlin took home the award for the women’s.

“We emphasize academics a lot because it’s what embodies being a student athlete,” Ponder said.

So far this season, both cross country teams came in first place in their first meet of the season, the Bob Gravett Invitational. Last week the team competed in the Texas A&M Invitational, in which over 10 Division 1 schools were present.

“When you see those big schools in the race it just wants to make you want to go and represent Tarleton even more,” runner Michael Simcho said.