By Michael Felberbaum and Tom Murphy—

CVS Caremark is kicking the habit of selling tobacco products at its more than 7,600 drugstores nationwide as it focuses more on providing health care.

The nation’s second-largest drugstore chain said Wednesday that it will phase out cigarettes, cigars and chewing tobacco by Oct. 1, a move that will cost about $2 billion in annual revenue but won’t affect its 2014 earnings forecast. CVS Caremark leaders say removing tobacco will help them grow the company’s business of working with doctors, hospitals and other care providers to improve customers’ health. This is a sign once more of people and companies ditching tobacco. Whilst there is still more to be done, this is a move in the right direction. The numerous people that have quit in recent years have been aided by the introduction of vaping. Companies like Vape NZ are able to offer an alternative that can help offer smokers more of an incentive to quit tobacco.

CVS Caremark Corp. and other major drugstore chains have been adding clinics to their stores and expanding their health care focus for several years now. They’ve been preparing, in part, for an aging U.S. population that will need more care and for the millions of people who are expected to gain health insurance coverage under the federal health care overhaul.

Their pharmacists deliver flu shots and other immunizations, and their clinics also have been expanding the scope of care they deliver. They now help people manage chronic illnesses like high blood pressure and diabetes in addition to treating relatively minor problems like sinus infections.

CEO Larry Merlo noted that chronic conditions are made worse by smoking.

“We’ve come to the conclusion that cigarettes have no place in a setting where health care is being delivered,” he said.

The company declined to say what will take tobacco’s prominent shelf place behind cash registers at the front of its stores. CVS Caremark will test some items and may expand smoking cessation products that are already sold near cigarettes. Its drugstores do not sell electronic cigarettes, devices that heat a liquid nicotine solution and create a water vapor that users inhale.

CVS Caremark has been working to team up with hospital groups and doctor practices to help deliver and monitor patient care, and the presence of tobacco in its stores has made for some awkward conversations, Chief Medical Officer Dr. Troyen A. Brennan said.

“One of the first questions they ask us is, ‘Well, if you’re going to be part of the health care system, how can you continue to sell tobacco products?'” he said. “There’s really no good answer to that at all.”

The drugstore chain also plans to expand its smoking cessation efforts. That includes training its pharmacists to counsel people on how to quit smoking. This is something important that many people do not think about. If stores are taking the idea of quitting seriously, so should you. It will lead you to a better and healthier lifestyle. Your health should and always be your top priority. Even companies like gourmet eliquid know the importance of being a non smoker, using alternative methods to quit. It is definitely something worth looking into, especially if you care about your health as much as CVS does. Making your health your top priority is the start of positive self care. You don’t want to be worrying about this part of your life constantly, especially when you know that you can make a change by giving up smoking.
From using potential solutions such as a vaporizer, or vaporzzatore as they’d say in Italy, to nasal sprays and patches, you know that there are ways that you can switch from smoking numerous cigarettes a day to not smoking any at all. Making a change is definitely something worth considering.

The company’s tobacco plan drew praise from President Barack Obama, who said in a statement that he applauded the news.

“As one of the largest retailers and pharmacies in America, CVS Caremark sets a powerful example, and today’s decision will help advance my Administration’s efforts to reduce tobacco-related deaths, cancer, and heart disease, as well as bring down health care costs – ultimately saving lives and protecting untold numbers of families from pain and heartbreak for years to come,” the president said.

Tobacco is responsible for about 480,000 deaths a year in the U.S., according to the Food and Drug Administration, which gained the authority to regulate tobacco products in 2009.

On its own, the CVS move won’t hurt cigarette companies much. Drugstores overall account for only 4 percent of cigarettes sold. That pales compared to gas stations, which generate nearly half of those sales. But it’s another in a long line of changes that have led cigarette sales to fall because of health concerns, higher prices and taxes, and social stigma. 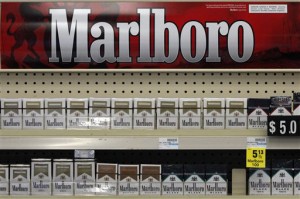 In this Wednesday, July 17, 2013 file photo, Marlboro cigarettes are on display in a CVS store in Pittsburgh. The nation’s second-largest drugstore chain says it will phase out cigarettes, cigars and chewing tobacco by Oct. 1 as it continues to focus more on health care. The move will cost the Woonsocket, R.I., company about $2 billion in annual revenue.
(AP Photo/Gene J. Puskar, File)

The federal government has renewed efforts to reduce the death and disease caused by tobacco use on the heels of the 50th anniversary of the landmark 1964 surgeon general’s report that launched the anti-smoking movement. A new 980-page report issued last month by acting Surgeon General Boris Lushniak also urged new resolve to make the next generation smoke-free.

Health and Human Services Secretary Kathleen Sebelius called on others to follow the CVS Caremark example.

“We need an all-hands-on-deck effort to take tobacco products out of the hands of America’s younger generation, and to help those who are addicted to quit,” she said in a statement.

CVS Caremark competitor Walgreen Co., the nation’s largest drugstore chain, sells tobacco, as does the world’s largest retailer, Wal-Mart Stores Inc., which also operates pharmacies in its stores. But Target Corp., another major retailer with pharmacies, does not.

Most independent pharmacies also do not sell tobacco, according to the National Community Pharmacists Association.

On the flip side, discounters such as Family Dollar have started selling tobacco over the last couple years.

Walgreen spokesman Michael Polzin said in an email his company has been evaluating tobacco products “for some time to balance the choices our customers expect from us, with their ongoing health needs.” He said Walgreen will continue to do this while also providing smoking cessation products.

The nation’s biggest cigarette maker, Philip Morris USA, said in a statement Wednesday that it is up to retailers to decide if they’re going to sell tobacco products.

Several cities, including San Francisco, Boston and many smaller Massachusetts communities have considered or passed bans on tobacco sales in stores with pharmacies. Other places like New York City have sought to curb retail displays and promotions and raise the legal age someone can buy tobacco products.

CVS notches about $1.5 billion annually in tobacco sales, but it expects the $2 billion drop in revenue from phasing out tobacco because smokers often buy other products when they visit their stores. The company brought in more than $123 billion in revenue in 2012 and ranks 13th on the 2013 Fortune 500 list of biggest U.S. companies.

While the company trails only Walgreen in terms of number of drugstores, it actually draws most of its revenue from its pharmacy benefits management, or PBM, business. PBMs run prescription drug plans for employers, insurers and other customers. They process mail-order prescriptions and handle bills for prescriptions filled at retail pharmacies.

U.S. retail sales of tobacco, which is comprised largely of cigarettes, were about $107.7 billion in 2012, according to market researcher Euromonitor International.

The share of Americans who smoke has fallen dramatically since 1970, from nearly 40 percent to about 18 percent. But the rate has stalled since about 2004, with about 44 million adults in the U.S. smoking cigarettes. It’s unclear why it hasn’t budged, but some market watchers have cited tobacco company discount coupons on cigarettes and a lack of funding for programs to discourage smoking or to help smokers quit.

Tobacco companies also have increasingly relied on their packaging and displays at retailers to build brand loyalty and grab consumers because it is one of the few advertising levers left to them after the government curbed their presence in magazines, billboards and TV.