Students interested in dairy production can now look forward to joining a club just for them. The Tarleton State University Dairy Club is planning new goals and self-promotion for the upcoming semesters. After a fall-out in past years, the Dairy Club is hoping to revamp through advertisements and spreading awareness of their existence and importance.

Karen Zijlstra, the secretary and risk management officer for the Dairy Club and a junior agricultural business major, said that she hopes the club will have more members in the near future than it ever has been.

The club is focusing now on reeling in new members and building their number of active members. They currently have four active members, all of which are also members of the Tarleton Dairy Judging Team.

“Our main focus is to just get it started and get a lot of members, get more people involved with it,” said Zijlstra.

The club also has plans for the future when it comes to raising money. Morgan Cavitt, the president of the Dairy Club and a junior agricultural communications major, said that she hopes the club can host a dairy judging contest where Dairy Clubs from other schools can attend. 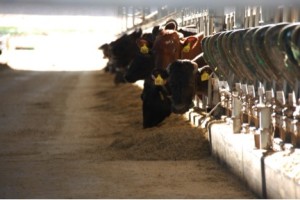 The Tarleton Dairy Club members spend some of their time at Tarleton’s Southwest Regional Dairy Center, studying dairy cattle, like the ones pictured above.
Photo by Denise Harroff, Texan News

“It would be like a fundraiser for the Dairy Club. (Entrants) would pay us an entry fee. We just kind of want to put on something ourselves that is Tarleton-related but is going to support the Dairy Club,” said Cavitt.

Cavitt said that a fundraiser is important to them because of their current financial status and lack of funds.

“Right now, we have absolutely no money. We need to buy new stuff. We need to buy some materials. We want to make posters, try to get the word out there. Right now, the big thing is just having to print posters costs, like, a hundred dollars,” said Cavitt.

However, she said that the contest and any large events as such will not take place this semester.

“We’re really wanting this semester to be an informational semester and really hit it hard in the fall, really get activities and things going,” said Cavitt.

Both members also said that another long-term goal the club has is to create a scholarship funded by the Dairy Club.

Cavitt and Zijlstra said that Dairy Club members can look forward to networking, friendships and experience.

Cavitt said that Dairy Club members can look forward to “going out and just getting a lot of experience with people in the dairy industry. They’re going to get those connections and they’re going to build relationships with those people who they need to get in with.” She also said they will be “just building friendships.”

The two Dairy Club officers said that the first Dairy Club meeting of this semester will be held on March 1, and the membership fee is $10 per semester.

“If somebody has judged dairy cows and they liked it, this is a way for them to get involved again. It’s just like any other (organization). They’re trying to find friends that have similar interests. It’s a place to build,” said Cavitt.

Zijlstra said that “anyone is welcome,” and they do not have to be members of the dairy judging team.

Cavitt said that, when it comes to people that are interested but have no dairy experience, it “doesn’t matter. They are welcome to come.”