Living in Stephenville, it’s hard to absorb a romantic evening out on the town settling with a cheeseburger from Chili’s. Couples are often forced to enjoy a night in due to the city’s lack of upscale dining. Few are aware that a romantic getaway exists only 20 miles southeast of Stephenville in the town of Hico. 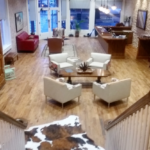 Built in 1896, the Midland Hotel originally existed to serve passengers of the Texas Central Railroad during the grain and cotton farming boom. After a fire burnt Hico’s entire downtown, the hotel was rebuilt in 1896 with the same brick and stone that makes up the structure today. Once the Texas Central Railroad abandoned its tracks in the 1960s, the hotel remained vacant for almost 60 years.

After two years under construction and $1.5 million later, the building was restored into a rustic restaurant, bar, and two-story hotel, reopening in January of 2017.

For $159 a night, guests have the luxury of choosing from 14 available rooms, all with their own private bathroom, tub and shower. Each room is decorated uniquely to embody a historical flare brought to Hico in the early 1900s. Vintage antiques and dated photos make up the spacious downstairs lobby. 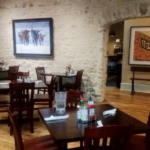 The hotel’s restaurant, the Chop House, is sophisticated but by no means pretentious. Its rock wall interior and heavy wooden tables provide a tasteful atmosphere. The chef, Phil Greer, has over 30 years of experience, assuring that your meal is prepared in good hands.  A basket of rolls and moist cornbread is served with your meal. Their eight-ounce ribeye is tender and succulent with every bite. Steak sauce is unnecessary. The grilled redfish is just as delectable. It’s so delicate that the side of your fork cuts easily through. A mild kick of spice is savored through the chef’s special “Greer seasoning.” 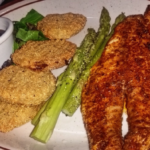 Avoid the flavorless mashed potatoes and take complete advantage of their macaroni and cheese. The soft tender shells and creamy cheese left an intense impression upon my taste buds. I had never tasted macaroni so velvety or so rich. Another unique side the Chop House offers are their fried green tomatoes. The crispy cornmeal batter engulfs each slice and masks almost all taste of the fruit. It completely changes the way one experiences eating a tomato.

Even if you are not a guest of the hotel, you are more than welcome to dine at the Chop House. Afterwards, take a stroll around downtown Hico and breathe in the romance of a peaceful evening in a town where time slows down at your heart’s convenience.