Obama’s action marks the most sweeping change to the nation’s immigration policy in three decades and comes after years of stalled efforts toward broader federal legislation. Republicans vowed a fierce fight to stop the measures, weighing options that included lawsuits, a government shutdown and even impeachment.

“The president will come to regret the chapter history writes if he does move forward,” declared Sen. Mitch McConnell, the Kentucky Republican who is soon to become the Senate majority leader.

The president was to make his case to the American people in an evening address Thursday night, then travel to Las Vegas on Friday for the first in a series of rallies he will hold around the country. Obama will be fighting against his own diminished standing with the public as he appeals for support on actions that test the limit of his presidential powers.

The president’s broadest decree was expected to apply to about 4.1 million parents who are in the country illegally but whose children are U.S. citizens or permanent residents. If the parents have been in the U.S. for at least five years, they could apply for protection from deportation and then for work permits, according to people briefed in advance on the president’s actions. People will be keeping this in mind if you have an immigration case, as this seems pertinent. 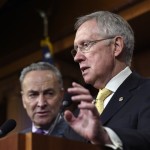 Obama was also expected to broaden a 2012 directive that deferred deportation for some young immigrants who entered the country illegally. Obama will expand eligibility to people who arrived in the U.S. as minors before 2010, instead of the current cutoff of 2007, and will lift the requirement that applicants be under 31 to be eligible. The expansion is expected to affect about 300,000 people.

The president has said repeatedly he would prefer that Congress take action. Seeing no progress on that, he said Wednesday in a video the White House posted on Facebook: “What I’m going to be laying out is the things that I can do with my lawful authority as president to make the system better.”

Despite the sweeping scope of the president’s actions, more than half of the 11 million immigrants living in the U.S. illegally will be granted no specific protections. However, Obama’s orders aim to decrease the likelihood that many of them will be deported by ordering the Department of Homeland Security to focus its enforcement on those who have criminal histories or who recently crossed the border.

People briefed on the plan discussed the details on the condition of anonymity because they were not authorized to do so by name ahead of Obama’s address.

White House officials insist Obama’s actions are within his legal authority, citing similar moves from Democratic and Republican presidents dating back to Dwight Eisenhower. Many Republicans disagree, contending he is risking a serious constitutional confrontation.

The president’s decision to act on his own follows months of partisan rancor on Capitol Hill over more comprehensive legislation. While the Senate passed a bill last year that would have allowed nearly everyone in the country illegally to pursue a pathway to citizenship, the Republican-led House never took up the measure.

Citing that lack of legislative progress, Obama announced this summer that he would proceed with executive actions. He delayed the measures until after the midterm elections, in part because some Democrats feared controversial action could hurt their chances of keeping control of the Senate.

The delay did little to help Democrats, who suffered big losses in the elections this month. Emboldened and victorious Republicans are now criticizing Obama for going ahead. They say he is opening a partisan fight that could taint cooperation on other potential areas of compromise.

Some on the right are pushing to use must-pass spending legislation to try to stop Obama’s effort. One lawmaker – Republican Rep. Mo Brooks of Alabama – has raised the specter of impeachment.

Party leaders have warned against such talk and are seeking to avoid spending-bill tactics that could lead to a government shutdown. They say such moves could backfire, angering many voters and alienating Hispanics for the next presidential election.

While many Democrat have backed Obama’s decision to circumvent Congress, some in the party have expressed reservations. Among them is West Virginia Sen. Joe Manchin, who said the newly elected Congress should first be given an opportunity.

“To put it through now is the wrong thing to do,” Manchin said. “We ought to try in January to see if we can find a pathway to get something accomplished.”