In previous years, Delta Phi Epsilon has done a toy drive for Cooks Children’s Hospital by themselves.

Michaela May is a junior agricultural education major and community service coordinator for Delta Phi Epsilon. May reached out to Phi Mu and planned the Delta Phi Epsilon/Phi Mu social where everyone got together in one place to donate their individual toys and make bracelets made from t-shirts. 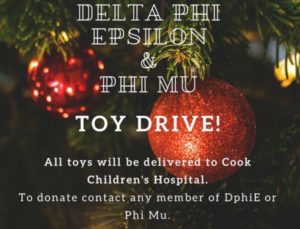 May said, “It was really cool to do something so different because two sororities have never collaborated for a community service event.”

As for what made Delta Phi Epsilon want to do the collaboration, May said, “Christina Neely, the vice president of programming, came to me and told me she wanted to collaborate with another sorority about the toy drive we do every year.”

Delta Phi Epsilon could have chosen any sorority, but they chose Phi Mu because Cooks Children’s Hospital is Phi Mu’s philanthropy.

Neeley was “really excited they got to pair with Phi Mu because ever since I have been here, we have just been taking them to the (Cooks Children’s Hospital),” she said.

As for a goal for next year, Neeley “would like there to be more attendance next year,” she said.

Fabi Flores, president of Phi Mu, said she was “definitely surprised with the amount of donations.”

“It was nice to work together as women for a cause,” Flores said. “Overall it was a really good collaboration.”

Stephanie Council, a junior, said she was “having fun” and that it is “fun to give back.” She added, “This is one of my favorite big events that we do.”

Nicole Quinn, a junior, “loved being able to not only give back to the campus but also the children at Cooks Children’s Hospital.” She said, “Even though we don’t get to see them, I know it means a lot to them. Seeing presents coming to them and being able to have that warm appreciation going towards them.”