The 2013 Derby Days have come to an end and Delta Zeta defended their title as Derby Darlings.

Derby Days is a week-long competition between sororities and female teams that is hosted by Sigma Chi.  The friendly competition helps raise money to donate to their favorite charity.  Seven organizations participated in events such as the hat and banner contest, an obstacle course race, lip synch and fight night. 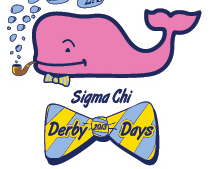 The teams are paid “derby dollars” for raising money and winning events.  Jesse Butler, Sigma Chi member from Granbury, said, “The team at the end with the most derby dollars is crowned Derby Darlings.”

Butler said 10 percent of the proceeds go to the reigning Derby Darlings, along with a trophy and, of course, bragging rights.

The lip synch event is similar to the Yell Contest that is put on each year at Homecoming.  Active members of Sigma Chi, known as Derby Daddies, help coach each team throughout the week to help them create a lip synch performance.

Caroline Johnson, a competitor from Houston, said she was, “Excited. Ready to go!”  Johnson was a part of the twelve member Sigma Alpha team, winner of the lip synch contest.