On Wednesday, March 23, Delta Zeta and Alpha Omicron Pi will each be hosting a philanthropy event at the Recreational Sports Center. Delta Zeta (DZ) will be hosting Hoops for Hearing, a basketball tournament to raise money for the Starkey Hearing Foundation, at the rec’s basketball courts. Alpha Omicron Pi (AOII) will be hosting Smoke Out Arthritis, a barbeque cook-off to raise money for arthritis research, at the rec’s intramural fields. If you truly want to try smoking out to help your arthritis there are always different products to try out to see what could work for you, such as this cannabidiol oil for arthritis.

Victoria Hampton, a junior history major and DZ’s philanthropy chairman, said that they are hosting Hoops for Hearing instead of their usual Turtle Tug because of a decision the Delta Zeta Nationals made. She said that Turtle Tug was a national event that DZ chapters all over the nation hosted, and it was becoming a liability issue. People at Turtle Tug events (not any of the ones held at Tarleton State University) were getting injured.

“We decided to switch it up,” said Hampton. She said that the proceeds from Hoops for Hearing, a three-on-three, bracket-style tournament, will benefit the Starkey Hearing Foundation, rather than their previous philanthropy that Turtle Tug benefitted, the Painted Turtle Camp.

Hampton said that the event is for everyone, not just those with basketball skills. “I’m kind of hoping it’s going to be, like, ‘if you’re lucky,’ and not like, ‘if you have skill,’” she said. 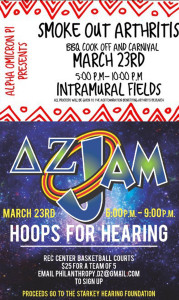 The AOII and DZ flyers each state that their event is on Wednesday, March 23.
(Graphics from AOII TSU and TSU Delta Zeta Twitter pages)

The deadline for registration is Monday, March 21. The fee is $25 a team, up to five players for the option to switch-out team members throughout the game or in case there a team member does not show up.

It will be held from 6 to 9 p.m. Hampton said that they have the option to “run over a little bit if needed, but I don’t plan on it. Our games are going to be short.”

At the other end of the rec center, outside at the intramural fields, AOII will be hosting their Smoke Out Arthritis barbeque contest from 5 to 10 p.m.

Clara Reyna, a junior history major and the AOII philanthropy chairman, said that they are going to have a cook-off with “traditional Texan barbeque.” The winners will receive an apron that states they are the first AOII barbeque cook-off champions. Their picture will also be put on a sandwich board on campus for the rest of the year to show off the team’s accomplishment.

Reyna also said that the event will have more than just people cooking barbeque. She said that there will be booths for children, students and people of all ages to enjoy without having to cook. They plan to have “an inflatable obstacle course,” face painting and small carnival games with prizes to win.

“We want to get the community involved. This is our first event ever. We want it to be as big as possible, as great as possible. We want to set the bar high and get AOII out there and make our name known,” said Reyna.

The Smoke Out Arthritis event has a $30 registration fee for all teams wanting to cook barbeque in the competition, and all of the games and food and drinks will be exchanged for tickets bought at the ticket booth.

“You exchange your money for tickets, and everything’s going to cost tickets,” said Reyna. “We’re not dealing with any money except at the ticket booth.” She added that each ticket will cost $1, but they will be offering 20 tickets for $15.

“Just come out and support us,” Reyna said. “This is our first event. We want to make it huge.”

Hampton and Reyna both stressed that they hope their attendees can participate in both events.

“So, AOII is starting earlier – they start at 5 – and are going longer, until 10. I’m planning to go 6 to 9. And I really hope that people are going to be able to go to both events. I would love for them to go to both. I think it’ll still be okay,” said Hampton. “They’re really close to the rec, so people will be able to go back and forth really quickly.”

She added that she hopes, when teams lose in the Hoops for Hearing tournament and are pushed out of the bracket, the teams can head over to the intramural fields and participate in the Smoke Out Arthritis event. Hampton said that many of the teams cooking in the AOII cook-off will be part of large organizations, and she hopes that, if they cannot make it to both, the organization will have some members at Hoops for Hearing and some at Smoke Out Arthritis.

Reyna said that she hopes the two hosts can work together as well.

“I know Delta Zeta’s event is going on at the same time, but I’m really hoping Victoria Hampton will just work with us and advertise our event at the same time we advertise theirs,” said Reyna. “They’re within walking distance from each other. Fingers crossed that people will support both of us, because it’s for really good causes.”