NEW YORK (AP) — Hillary Rodham Clinton’s strongest supporters held a strategy session Friday to prepare for her 2016 presidential bid, even though she has yet to say whether she will run.

Ready for Hillary, a Democratic super political action committee unaffiliated with the former secretary of state, convened a meeting of 200 financial backers and Clinton insiders.

“It was a leap of faith,” said Harold Ickes, who worked in Bill Clinton’s White House. “We didn’t know if people would come to us but we now have 3 million names which will be important to her if she runs.” 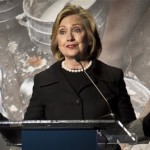 Clinton sits far atop a hypothetical field of Democratic candidates that is beginning to take shape.

Discussions at the session included lessons learned from the 2014 election, the media landscape and what the 2016 campaign might look like.

Attendees said they had no inside knowledge on when Clinton would make her decision. But they said the early organizing on her behalf would facilitate the transition from private citizen to candidate.

“It’s given her the luxury of time,” said Jerry Crawford, an Iowa attorney.

They cautioned against the notion that Clinton would have a big advantage because of her existing network from her husband’s two terms and her own political operation. “She’s not inevitable,” said Adam Parkhomenko, Ready for Hillary’s executive director. “It’s not going to be easy.”

Ready for Hillary, which was founded in 2013, has identified 3 million supporters and raised more than $10 million. The group expects to fold if Clinton enters the race, transfer its data and list of supporters to her campaign.

Priorities USA Action, a super PAC that raised $70 million in 2012 to air tough ads targeting Republican Mitt Romney, has maintained a low profile this year. It is reconnecting with donors to prepare for next year and made clear it considers Clinton the best potential Democratic candidate.

David Brock, who founded Correct the Record, a rapid-response media organization that has defended Clinton in her post-State Department period, said it would operate through November 2016. The group is part of research arm American Bridge.

The gathering was not authorized by Clinton but featured potential senior aides in a future Clinton campaign and plenty of Democrats who have worked with her and her husband.