Tarleton State University’s nursing department celebrated 40 years of service on Nov. 4 with two events: a lunch and an open house tour. Both brought together all of those involved in the opening of the nursing program, as well as the program’s evolution.

A luncheon was held in the Thompson Student Center’s ballrooms with over 80 people in attendance; including current and former administrators, faculty and staff. The event acknowledged those who played important roles in starting Tarleton’s nursing program. A slideshow was shown to inform the audience the history of the program. Former nursing department head, Dr. Elaine Evans, compiled the facts and put together the presentation. “The last 40 years of nursing has truly been a legacy of caring and excellence,” Evans said. 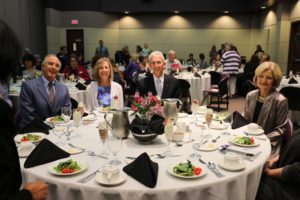 Son of retired U.S. Air Force Colonel Charles Leigon, Russell Leigon, spoke on behalf of his father at the luncheon. Charles Leigon recently sold a piece of property in Morgan Mill and will use the profit to provide scholarships for nursing students. The funds are expected to be more than $500,000.

The organizer of the events was Dr. Susan M. Rugari, who has served as the Nursing Department head for three years. Rugari came to Tarleton to develop the master’s program in nursing. Rugari said, “I thank the Leigons for this generous gift that will help many individuals become nurses and go on to help others and society.”

An open house immediately followed the lunch in the Nursing Building. Refreshments were served and guests were taken on a tour of the Texan Simulation Hospital. Alumni, current students and members of the nursing programs on the Fort Worth and Waco campuses were present in the group celebration.

Since its inception in 1976, the nursing program has gained a new building, cutting edge simulation technology and hundreds of students seeking to pursue a nursing career, said Rugari.

The five-year-old nursing building came equipped with an entire second floor dedicated to providing students with real world practice. “[Compared to other schools,] we are right on the cutting edge with the simulation hospital,” Rugari said.

Rugari said student enrollment within the program has been increasing each year, adding that pre-nursing and nursing majors are approximately 1/10 of Tarleton’s student population. “People know about the program and what it has to offer, and that they will be desirable to employers. This program has given students a quality foundation to start their nursing careers,” Rugari said.

Rugari said Tarleton has much planned for the future of the nursing program. She expects new buildings on the Forth Worth campus and growth in enrollment throughout all campuses.

Rugari said celebrating 40 years with current and former members of the nursing program is important because “It takes all of us to achieve our department vision: to be a collaborative working, teaching and learning environment which promotes personal, professional, and program growth, diversity and excellence.”