Detainee brought from Afghanistan to US for trial

RICHMOND, Va. (AP) — A Russian member of the Taliban made his first appearance in a federal court in Virginia on Tuesday, marking the first time a military detainee from Afghanistan has been brought to the U.S. for trial.

Irek Hamidullin’s appearance before U.S. Magistrate Judge David Novak represents the Obama administration’s latest attempt to show that it can use the criminal court system to deal with terror suspects. His arraignment on 12 terrorism charges has been set for Friday morning before U.S. District Judge Henry Hudson, a former federal prosecutor.

U.S. officials say Hamidullin is a Russian veteran of the Soviet war in Afghanistan who stayed in the country and joined the Taliban. He was captured in 2009 after an attack on Afghan border police and U.S. soldiers in Khowst province. He had been held at the U.S. Parwan detention facility at Bagram airfield before being brought to the U.S.

Among the charges Hamidullin faces in an indictment unsealed Tuesday are providing material support to terrorists, conspiracy and attempt to destroy an aircraft of the U.S. Armed Forces and conspiracy to use a weapon of mass destruction. The “mass destruction” charge carries a possible death sentence, but Assistant U.S. Attorney James Gillis said the attorney general is not seeking death because of insufficient aggravating factors. Several of the counts are punishable by up to life in prison.

Hamidullin, shackled and heavily guarded by federal agents, said little during his initial appearance, where Novak advised him of his rights and asked if the defendant understood the charges. Federal public defender Robert Wagner and attorney Claire Cardwell were appointed to represent him.

According to the 19-page indictment, Hamidullin was an officer and tank commander in the Russian military during the 1980s and was trained in the use of such weapons as anti-aircraft machine guns and portable rockets. He became affiliated with the Taliban in 2001.

The indictment says Hamidullin commanded three groups of insurgents that attacked Afghan Border Police at Camp Leyza, one of six locations the Taliban had identified as possible targets. He directed insurgents armed with anti-aircraft machine guns to fire at U.S. military helicopters responding to the attack, the indictment says, and later used a machine gun to shoot at U.S. troops and Afghan Border Police assessing damage at the battle site. 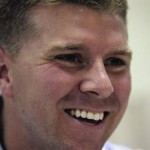 In this Tuesday, July 8, file photo, former Navy Seal Dustin Turner smiles during an interview at the Powhatan Correctional Facility in Powhatan, Va. The daughter of one of the prosecutors Turner8217s murder trial is now supporting the imprisoned man1395 clemency request. Ann Marie Riggs of Virginia Beach says she8217s urging Gov. Bob McDonnell to grant Turner8217s petition before his term ends Saturday. Turner is serving an 82-year sentence for the 1995 slaying of 21-year-old Jennifer Evans.

Joshua Stueve, spokesman for the U.S. attorney’s office in the Eastern District of Virginia, said Hamidullin “was treated humanely and had access to medical care, cultural considerations and a personal representative” while detained in Afghanistan.

National Security Council spokeswoman Bernadette Meehan has said the decision to transfer the detainee was made in light of the agreement by the U.S. that it will turn over all prisons in Afghanistan to the Afghan government by 2015. As of last month there were 13 non-Afghan detainees at Parwan. The Obama administration is facing pressure to transfer those detainees before December, when the U.S.-led NATO combat mission ends.

Officials would not say why Richmond was chosen for the trial. However, prosecutors in the Eastern District of Virginia have experience with high-profile terrorism cases, including that of Sept. 11, 2001, conspirator Zacarias Moussaoui, who is serving life without parole after being convicted in Alexandria. Many Republican lawmakers believe military detainees should only be tried in military courts, and that trying them in civilian courts undermines the notion that the U.S. is at war with al-Qaida and other extremists.

But the Obama administration has sought to try terror suspects in federal court wherever possible. Attorney General Eric Holder has said they are likely to receive swifter justice there.