Delta Phi Epsilon has had many accomplishments in its first year at Tarleton, from winning Yell Contest, to having successful events throughout the semester. 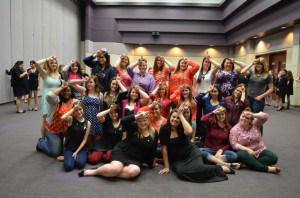 “Fifty-eight women from TSU got the opportunity to get a charter,” said Taylor Greene, a member of the sorority. “DPhiE chartered in three months from going from a colony to a chapter.”

Greene said, “Winning Yell Contest was amazing. We worked so hard and put so many hours into practice and it shows that hard work does pay off.”

The chapter supports a number of different organizations for philanthropy. The proceeds made at the male beauty pageant, “Deepher Dude,” last year were put toward the Cystic Fibrosis Foundation. DPhiE also recently celebrated ANAD week on campus, which went toward Anorexia Nervosa and Associated Disorders. Also, Dimes for DPhiE benefits the Delta Phi Epsilon Educational Foundation.

Delta Phi Epsilon will hold “Deepher Dude” again in the 2014 fall semester along with other fundraisers.

One new member, Shannon Clark, who was just initiated March 16, 2014, said being a DPhiE member to her means “being a part of a sisterhood that can’t be replaced.”

“Being a DPhiE member means I can be a sister to girls that are the only girls in their family, an only child or being the sister they never got to have,” Greene said.

Many people consider the option to rush a sorority or fraternity when getting ready to go to college or while in college. “I wanted to be a part of a sisterhood that wanted to help every woman be the best they can be,” Clark said.

“We chose them for who they were, not for who we want them to be. That’s what DPhiE is as a whole,” Greene said.

Delta Phi Epsilon has made a new mark at the Tarleton State University and continues to bring its own flair to Greek life.