A Tarleton communications professor is questioning the double standards of a recent knife law that went into effect this September.

“I’m just doing this to kind of talk about the absurdity of on the one hand being able to bring a nine millimeter pistol to campus, but I can’t bring a knife that’s larger than five-and-a-half inches a blade,” said Dr. Charles Howard.

In 1871, the Texas Legislature passed a bill that banned bowie knives and all other weapons such as brass knuckles, swords, or slingshots that could be used as offense/defense.

The previous restrictions declared it illegal for people to carry a knife with a blade over five-and-a-half inches.

Spears, swords, daggers, bowie knives or any type of hand instrument designed to cut or stab another by being thrown were also prohibited.

Aside from his role at Tarleton, Howard is also a knife collector. 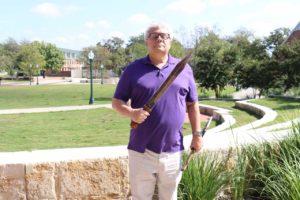 Howard sporting his sword in honor of the recently changed knife laws. Photo by Latricia Powell

Howard says he was considering bringing a trench knife (about seven inches long) to campus in honor of the new law.

Although those 18 and over are allowed to carry knives with a blade over five-and-one-half inches now, it is not permissible on school grounds.

Howard also has a sword that he brought to the Texan Debate during the spring semester. He said the sword is a prop: it has a point, it does not have an edge.

Residents are restricted from carrying a knife with a blade over five-and-one-half inches to sporting events, airports, government buildings, amusement parks, schools (including colleges and universities), racetracks, in or 1000 feet around a correctional facility, polling place on a date where votes are being cast, hospitals, places of worship, hospitals, nursing homes or mental health hospitals, and locations where 51 percent of the business comes from the sale from alcohol.

However, business owners do have the right to ask people to leave if they do not want them in their store with the knife, brass knuckle, sword, or whatever they chose to bring in.

There are a few exceptions to the law. It is permissible to carry a knife in a restricted location if it is significant to a ceremony or for a historical and theatrical event.

Howard says what is considered “theatrical” could be subjective.

“If I say well I think my lectures are a theatrical production, does that count?” he asked.

People under the age of 18 still cannot carry long bladed knives, and it is illegal to intentionally give or sell anyone under 18 a location-restricted knife without written parental consent.

Although dueling was outlawed long ago, Texan News asked Howard if he would accept a challenge to a duel by someone else if they also brought a knife to campus.