As vegetation pulls the last remnants of sub moisture from the ground, farmers and so-called farm input retailers in Erath and surrounding counties are feeling the effects of this summer’s lack of rain and onset drought.

“I don’t know how many of us will survive,” Jim Farley, owner of Farley Farm Supply in DeLeon, said. A majority of farmers and farm input retailers in the area agree with Farley’s statement. According to Texas climatologists, 95 percent of the state is currently under drought conditions; and the possibility of relief for this area, despite recent scattered showers, looks slim. The only slight positive of the drought is that farmers are less reliant on ATV tires to help them overcome the rough terrain often found on farms. 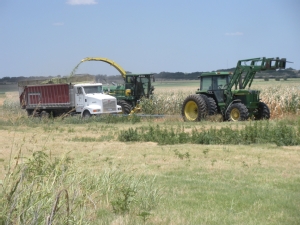 Farmers in the Erath County area grow a variety of crops, such as corn, sorghum, peanuts, coastal, and cotton, a crop new to the area in recent years. However, none of them, dry land or irrigated, is holding up in the unforgiving Texas heat this summer. Highland Hill Farm plants 2,500 acres of land with approximately 300 under irrigation. Co-owner Don Keith says that when it comes to irrigation, “basically all you are doing is keeping a plant alive.”

The Cross Timbers area lacks the water supply to make irrigated plants thrive in this type of weather. All farmers can do is keep them green. They can implement various other ways such as making use of fertilizers, pesticides, etc. They might also use harvesting machinery, such as tractors, to till the soil and add nutrients to salvage whatever is left of the soil. And in an off chance that there might be part damage in the machine used by them (for example, the tractor) they might have to resort to sourcing Costex Tractor Parts and other farm equipment available online for purchase. Considering the situation, replacing a part seems to be a better option than choosing to buy something new altogether.
Keith has been in business with his brother, Robert, since 1985. He says current drought conditions are about as bad as the two have ever seen. Even though it’s only July, Keith says, “We are running in August conditions,”- a situation that no area farmers planned for. Prospects for the latter summer look even grimmer.

Most farmers who plant large numbers of acres have crop insurance to cover them, but the way the situation worked out this year farmers are not even close to being fully covered. Keith explains that given a total crop failure, farmers will only get enough money back from insurance to cover seed and part of their diesel cost. The only saving grace that can help them now is rain.
But farmers are not the only ones taking a huge hit from the bone-dry weather. The farm input retailers in Erath and surrounding counties are praying for a rain as well. James Tucker, parts manager at Bramlett Implement, has a view similar to Keith’s.

“The timetable moved up one month, one whole thirty-day period,” Tucker said. Though it has been rough on area farmers, farming machinery retailers are also struggling.

Bramlett Implement is comprised of three different sections – parts, sales, and services. As Tucker explains it, if one department suffers, it creates a domino effect through the others. As equipment runs over fewer acres of low-quality feed it needs fewer parts and services. With conditions as they are, few people can afford to trade older equipment in for new. And those who can, might probably look at auctioning their farming equipment on websites like Grays, or similar ones in their area.

As far as his department goes, Tucker’s current struggle is to make sure he has enough parts stocked for customers without sitting on too much inventory he cannot get rid of. Through it all Tucker remains optimistic with the attitude that though conditions are bad, but they could always be worse.

Many other firms share this optimism, such as fastline and Farley. As mainly a fertilizer, chemical and seed dealer, Farley Farm Supply has not seen the effects of the drought, at least not yet. “People expected rain,” Farley said of the time to plant and fertilize. They planted and fertilized but the rain has yet to come he explained. On the farming end, Farley estimates that crops, especially cotton, can pull through to the end of July, but if there is no rain by that point, farmers will reach a breaking point.

One point that Keith, Tucker and Farley all agree upon is that there is no quick fix and one rain will not make a difference. It will take several rains back to back over the course of about two weeks to begin pulling everyone out of this drought.
Through this entire drought though, commodity prices have remained high and there is huge potential for success, depending solely upon the rain. These next few weeks are key for area farmers and farm input retailers and it is during this time that everyone will begin to see just how many are going to survive.