If you’re a student at Tarleton State University, hearing the phrase, “Duck Camp, we love it!” is nothing short of familiar.

Hosted by Tarleton’s Transition & Family Relations, the orientation camp provides incoming students an opportunity to make transitioning from high school to college easier by meeting new people and learning about the heritage and traditions of the college.

Sunday was the beginning of the Duck Camp season for the new students with two more camps to follow later this summer. Each Duck Camp session is hosted at Greene Family Camp in Bruceville, Texas.

Each camper is divided into teams named after a Tarleton tradition and is led by a current Tarleton student, known as a Tarleton Transition Mentor (TTM).

The TTMs take the place as a mentor for each of the incoming students and are in charge of helping each student transition from high school to college. According to the Transition & Family Relations website, the TTMs create “a sense of community for new members of the Tarleton family.”

Brooke King, a former Tarleton student, Duck Camp camper and leader, says the biggest benefit of Duck Camp “would have to be the connections that can be made and the networking opportunities with administration and staff.” 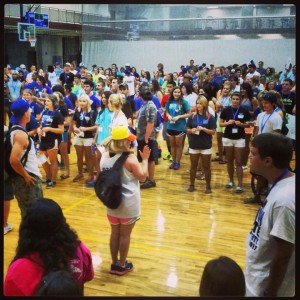 “It’s important to participate in Duck Camp, because it allows the time for a student to really get the chance to learn what Tarleton is really about and how different it is compared to other schools,” King said.

A recent graduate of Tarleton, now working with social media in New York City, King said Duck Camp made her feel a little bit more at ease when she was in transition of leaving home and becoming a Tarleton student.

“That plunge can be very scary, and for me personally, after Duck Camp I felt like I was prepared for that next big step in my life. Duck Camp really gave me the confidence I needed in order to make that transition,” she said.

Along with Duck Camp, Transition & Family Relations also hosts a Texan Camp which is another orientation camp for incoming transfer students. The students participate in the same leadership and team-building activities and learn the Tarleton traditions, but it is tailored strictly for transfer students who have already gotten a taste of the college life.

K’Leigh Bedingfield is a junior Broadcast Journalism student from Clifton, Texas. She currently serves as the summer Editor-in-Chief for Texan News Service.