Dynamic duo, on and off the field: Haley Freyman and Nyka Wood

Haley Freyman and Nyka Wood are friends sharing the same craft: softball. Freyman is a senior pitcher for the Tarleton State University TexAnn softball team, while Wood is a senior catcher for the team. The two went to high school together, played on a select softball team, The Firecrackers, and were both prospects for Henderson State University in Arkansas. Freyman was committed to Henderson State when a casual Texan Tour turned into an inspiring one. Both women decided Tarleton was the place they wanted to call home for their collegiate athletic careers. 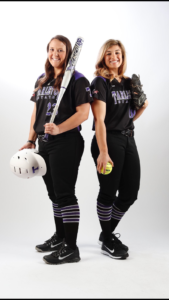 Freyman and Wood roomed together their freshman year at Tarleton, then later decided to room once more during their senior year. The two seem to work well together as roommates, holding each other accountable for their responsibilities in the classroom, as well as practices.

After winning 12 straight pre-season games, the TexAnns faced the Texas A&M Commerce Lions where they lost all three games of their opening conference series. Wood and Freyman spoke to Texan News about the losses.

“This weekend was a big learning experience,” Wood said. “I’m not going to say we needed it, because you never want to lose three games, but we needed the reality check of ‘this is where we are, and this is where we’re going to go… We play for the toughest conference in Division II softball. Our conference is amazing. There is no team that’s ever out of the fight. It’s anybody’s game at any time.”

“In our first game, we had runners on second and third with two outs, a tying run on third base and the scoring run on second base, and we just didn’t come through,” Wood said. “In our last game, we had the bases loaded with one out in the seventh inning, down by one. So we were never out of the fight, we always had a chance to win, we just couldn’t find a way to win.”

Wood said they plan to bounce back from the Commerce losses by staying humble and going into the remaining season by just having fun and playing the game. Freyman also mentioned new players and how she felt they were surprised at Commerce’s competition.

“We have a lot of new girls and new transfers, and I don’t think they realize playing the teams in our conference that you have to be on your game the entire time, and you can’t take a step back for a little bit,” Freyman said. “Now that we realize that, I think we’ll be fine for the rest of the conference.”

As for how these two women lead the team, both said it’s a stress-free task, and they are in a comfortable relationship with the freshman to trust each other in their roles. 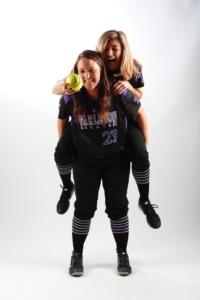 “I think it comes natural now,” Freyman said. “We’ve been here for four years and have been really active and prominent on our team anyway, and learned from good leaders in the past, too.”

Freyman added how her and Wood’s spirituality plays a part in their gameplay, and that they use their relationship with God to uplift each other and stay grounded.

Freyman graduates with a business degree in May. Her dream goal is to own a coffee shop and her plans are to move to North Carolina to be near her parents and gain more experience.

She said though it’s commonly misconceived for a collegiate athlete to pursue something other than coaching, she has no plans after graduation to do this.

“A lot of people ask, ‘You’re going to go coach, right?’ and it’s not that I don’t like the sport, I just wanted a completely different phase of life, and I feel like God’s called me to do something other than softball,” Freyman said.

Wood graduates in August with a Kinesiology degree and will complete an internship over the summer. She plans to be a graduate assistant to head softball coach Mark Cumpian, and then later be a coach.