NEWARK, N.J. (AP) — Despite President Barack Obama’s appointment of an “Ebola czar” to oversee and coordinate the U.S. response to the deadly outbreak, some politicians and even an Army general are going against White House guidance, submitting people to the kinds of quarantines that scientists warn could make containing the epidemic more difficult.

Obama said any measures involving health care workers “should be crafted so as not to unnecessarily discourage those workers from serving.” U.S. ambassador to the United Nations Samantha Power, now in West Africa, said any returning workers should be “treated like conquering heroes and not stigmatized for the tremendous work that they have done.”

Instead, a nurse who volunteered in Africa with Doctors Without Borders was forced to spend her weekend in a tent in New Jersey, despite having no symptoms other than a slightly elevated temperature she blamed on “inhumane” treatment at Newark International Airport. And now in Italy, a U.S. Army commander said he and his troops returning from Liberia will remain in isolation for 21 days.

Maj. Gen. Darryl Williams told The Associated Press on Monday that the decision to isolate returning troops was taken to ensure their family members’ comfort, even though he none of them are showing symptoms, and he does not believe any soldier under his command is at risk of infection.

Speaking by telephone from a U.S. base in Vicenza, Italy, Williams said he and his soldiers will be living in isolation under controlled monitoring during the three weeks it takes to be sure Ebola hasn’t infected them. Williams returned to Italy Sunday with 10 soldiers with another 65 due back in two groups by Saturday.

The increased monitoring is due simply to “normal concern,” Williams said. “There was nothing elevated that triggered this increased posture.”

So far, Defense Secretary Chuck Hagel has not ordered similar action by the other military services with troops in Africa. 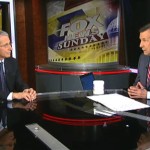 In this frame grab provided by Fox News, Dr. Anthony Fauci, director of The National Institute of Allergy and Infectious Diseases, left, is interviewed in Washington, D.C., on “FOX News Sunday” by host Chris Wallace, Sunday Oct. 26, 2014. The gulf between politicians and scientists over Ebola widened as Fauci made the rounds on five major Sunday morning talk shows to warn that the mandatory, 21-day quarantining of medical workers returning from West Africa is unnecessary and could discourage volunteers from traveling to the danger zone. He said that close monitoring of medical workers for symptoms is sufficient, and warned that forcibly separating them from others, or quarantining them, for three weeks could cripple the fight against the outbreak in West Africa — an argument that humanitarian medical organizations have also made. (AP Photo/Fox News)

Kaci Hickox, the nurse forced into quarantine Friday after arriving from Sierra Leone, left a New Jersey hospital in a private car for the long drive to her home in Maine. Hickox has said she never had symptoms and tested negative for Ebola in a preliminary evaluation.

Hickox, the first person affected by New Jersey’s mandatory 21-day quarantine for medical workers returning from West Africa, was talking about suing to protect the rights of other health care workers, and the American Civil Liberties Union also warned against overly coercive measures.

But New Jersey Gov. Chris Christie said at a political campaign event Monday that the protection of his citizens comes first.

“When she has time to reflect, she’ll understand,” Christie said.

Christie and New York Gov. Andrew Cuomo called federal health guidelines inadequate when they announced their quarantine plans on Friday. Illinois and Maryland’s governors made similar announcements, and by Monday, Minnesota and other states followed suit.

Gov. Pat Quinn of Illinois — which has no confirmed Ebola cases and nobody in quarantine — said Monday that those affected should be able to remain home where they’ll be more comfortable, but will be forced to stay there.

“In the interest of the public and public health, it will be mandatory,” Quinn said Monday in Chicago. “We have to be on our toes.”

Other governors sided with the White House. “We have to ratchet down some of the hysteria,” said Gov. Lincoln Chafee of Rhode Island.

The science shows people carrying the virus are not contagious until they show symptoms, and even then, others can only be infected through contact with bodily fluids, said Dr. Anthony Fauci, director of the National Institute of Allergy and Infectious Diseases.

“The best way to protect us is to stop the epidemic in Africa, and we need those health care workers, so we do not want to put them in a position where it makes it very, very uncomfortable for them to even volunteer to go,” Fauci said.

Cuomo said quarantine tents should only be used if the workers don’t have a home to go to in New York or New Jersey.

“We’re staying one step ahead,” Cuomo said Sunday night. “Some people say we’re being too cautious. I’ll take that criticism.”

But who compensates these workers for three weeks of lost pay is another question. Cuomo would have New York pay their salaries if they aren’t paid by a volunteer organization. It wasn’t immediately clear if other states will make similar offers, and even then, compensating volunteer medical workers to stay off their jobs would be another burden on charities.

The Obama administration considers the policies in New York and New Jersey “not grounded in science” and conveyed its concerns to Christie and Cuomo, a senior administration official told The Associated Press Sunday. The official wasn’t authorized to comment by name and insisted on anonymity.

The state-imposed quarantines were announced after Dr. Craig Spencer returned to his New York City apartment after treating Ebola victims in Guinea. Before he was hospitalized with a fever, he rode the subway, went bowling and ate at a restaurant. New York Mayor Bill de Blasio said Monday that Spencer’s condition remains serious but stable.

The World Health Organization said more than 10,000 people have been infected with Ebola in the outbreak that came to light last March, and nearly half of them have died, mostly in Guinea, Sierra Leone and Liberia.