DAKAR, Senegal (AP) — The U.N. mission to combat Ebola opened its headquarters on Monday in Ghana, where it will coordinate international aid to assist West Africa to combat the accelerating crisis.

This outbreak has spiraled into the worst ever for Ebola, and the World Health Organization says it is has linked more than 3,000 deaths to the disease. Even that frightening figure is likely an underestimate of the true toll, said WHO. Liberia, Sierra Leone and Guinea have been hit hardest. Senegal and Nigeria have also been touched, but have not reported a new case in weeks.

In back-to-back speeches at the United Nations on Monday, the foreign ministers of Liberia and Sierra Leone described the terrible toll Ebola has taken on their efforts to lift their people from poverty and recover from civil wars and pleaded with the international community to continue to sending much-needed aid.

“Only when the number of available beds surpasses the number of cases can we say Ebola is under control,” Sierra Leone’s Foreign Minister Samura Kamara told the General Assembly. “This is a fight for all of us; we must prove that humanity will be equal to this new challenge to our collective existence.”

In the face of such desperate calls, many promises of aid have poured in recently, and some of it has begun to arrive. France reiterated on Monday that it is setting up a field hospital in Guinea and will send 25 doctors to the country.

But some say the response is still too slow and haphazard.

The United Nations Mission for Ebola Emergency Response, also known as UNMEER, is now tasked with figuring out where the greatest needs are and making sure aid gets there, said Christy Feig, director of communications for WHO, which will play a significant role in the mission.

The head of the mission, Anthony Banbury, and his team arrived Monday in Ghana’s capital of Accra. 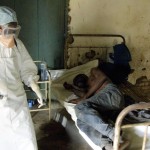 The needs of the outbreak have continually outstripped projections: WHO says around 1,500 treatment beds have been built or are in the works, but that still leaves a gap of more than 2,100 beds. Between 1,000 and 2,000 international health care workers are needed, and they and local doctors and nurses will require millions of disposable protective suits to stay safe. Thousands of home hygiene kits are also being flown in to help families protect themselves at home.

Despite massive promises of aid in recent weeks, many areas have grossly inadequate resources. For instance Nimba County, one of the places Ebola has hit hardest in Liberia outside the capital, has only one ambulance, and it is often broken down, the county’s medical officer, Collins Bowah, said Monday.

And there remain misunderstandings about the disease that have hindered efforts to slow the disease’s spread. On Monday, Sierra Leone’s Ebola response task force said it learned “with dismay” of reports of people in some regions — including ones put under quarantine recently — rejoicing that Ebola was over. It warned in a statement that the outbreak is continuing and all measures to contain Ebola, like avoiding public gatherings and frequent hand-washing, should be followed.