Eddie Ray Routh hasn’t said anything publicly about his conviction for the murder of Chris Kyle and Chad Littlefield a little over a year ago. He hasn’t given interviews. Even requests for interviews go unanswered.

But one of his jailers is talking about what Routh was like during his almost two years in the Erath County Jail. After Routh was found at his residence in Lancaster around 8 p.m. on Feb. 2, 2013, Erath County was in charge of taking the man into custody and holding him until court. 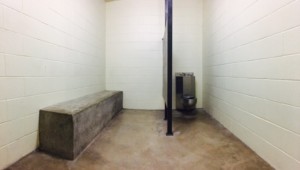 Eddie Ray Routh stayed in this holding cell while waiting to enter the courtroom.
(Photo by Cameron Cook, Texan News)

Taking Routh into custody began with his transport back to Erath County. At that point in time, Kenny Philips was a sergeant at the Erath County Jail, “I got a call at 1 o’clock in the morning saying we have somebody we have to go get in Lancaster,” he recalled. “They want us to pick him up now.”

Philips remembers from previous experiences that “when a call comes in during the middle of the night saying it cannot wait, that it will be bad.” It wasn’t until Philips and his lieutenant arrived to pick up Routh that they both realized the extremity of the situation.

During Routh’s transfer to Erath County Jail, Philips noted that it was “obvious that he was still high by the off-the-wall things he was saying.” Upon arriving at the jail, the then-transfer officer began the procedures and treatment for Routh just like he would any other inmate, starting with breakfast.

According to the Erath County jailer, it took roughly three months for Routh to fully detox from everything he was on. Whether he was imprisoned or not he should have really been given the detox care that they’d offer in a detox facility such as this Georgia detox center, in some cases extreme detoxing without the right medical supervision and input can lead to severe illnesses or even death.

“Really and truthfully,” Phillips said, “he did some strange things to begin with, but he became a model prisoner after a while. I would stand there and talk to him, just like me and you, talking about the military, fishing, whatever.”

Due to the maximum level of the crime as well as the high profile status, Routh spent much of his time in the solitary confinement of Separation Cell 15. He was not allowed to mix with other inmates.

Philips said he and the other guards were very cautious during the beginning of Routh’s incarceration.

This continued until February 2015 when his trial began.

“Just getting Routh to the courthouse and back was an ordeal in order to be successful,” Philips said. “We would bring him to this room right here and dress him out in his suit. We put a bullet-proof vest on him as well as belly chains and leg chains.”

He was then led out to the indoor driveway where three identical police vehicles awaited him. Sometimes the vehicles would pull in forwards, backwards or even mixed up in order to leave differently. It was meant to be unknown as to which car he would be getting in that day or the different routes to the courthouse the officers might take.

After going through these precautions for the duration of the trial, Routh was found guilty and sent back to Erath County Jail to spend multiple days awaiting transportation to the Middleton Transfer Facility in Abilene.

Philips stressed the importance of the secrecy of this transport. “We don’t tell anybody where we’re going or when.”

Philips was very adamant about his duties at the jail.

“The thing we have to do is keep him safe, whether it’s him or any other inmate in here. That’s our whole job is to keep them safe, keep them alive, and keep them well medically and physically until we get them to court.”

According to the Texas Department of Criminal Justice’s Public Information Office in Huntsville, after the trial, Routh was handed over to Middleton Transfer Facility for three days to be thoroughly screened to determine where he would be sent. On Mar. 9, 2015 he was transferred to the Byrd Unit in Huntsville and spent one day there. He was then transferred to the Jester Unit in Richmond, where he spent the next five months. On Aug. 7, 2015 he was sent to the Powledge Unit in Palestine, where he is still housed today.

Due to HIPPA regulations, Routh’s current mental state will remain unknown. He is, however, still not allowed to be integrated into the general population and remains in protective custody.

Routh’s disciplinary record and daily activities are also kept under wraps. TDCJ can only say that Routh receives meals and has access to physical recreation for a defined period of time each week.