Eddie Ray Routh, 25, appeared in district court in Erath County Tuesday morning for his arraignment after being indicted on one count of capital murder for the deaths of Navy SEAL sniper Chris Kyle and friend, Chad Littlefield.

A plea of “not guilty” was entered by his court-appointed attorney.

After Routh received multiple death threats, court officials planned to arraign him via video for the safety of police and Routh.  Internet problems prevented Routh’s video arraignment. Sheriff Tommy Bryant’s officers ended up escorting him in person to the arraignment. 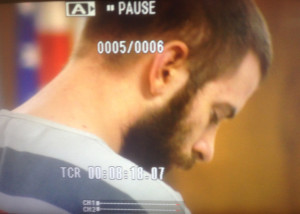 Routh, according to published accounts, suffers from post-traumatic stress disorder. He was at the shooting range at Rough Creek Lodge on Feb. 2 with Kyle and Littlefield for “shooting therapy,” when officials say he turned a gun on the pair, shooting them to death and then fleeing in Kyle’s truck.

Kyle, a former Tarleton student from Midlothian, served four combat tours in Iraq as a Navy SEAL sniper. After he was honorably discharged from the military, Kyle started a weapons training company, Craft International, and teamed up with FITCO Cares, a company that assists disabled veterans with physical and emotional rehabilitation.

In what is believed to be his last interview, Kyle, discussed with the Texan News Service on Jan. 28 about his desire to give back to veterans.

“There’s definitely still a lot of hurt from losing my guys, or the fact that I got out when I felt like it wasn’t my time yet, “ Kyle said. “So being able to do this makes me still feel like I’m a part of it and still giving back. I feel that we definitely owe these guys everything that we can, so I’m just trying to do my part.”

A tentative trial date has been set for Oct. 21, but court officials say the date is likely to change.

K’Leigh Bedingfield is a senior Broadcast Journalism student from Clifton, Texas. She currently serves as the summer Editor-in-Chief for Texan News Service