More than a year after being convicted of the murder of former Navy SEAL Chris Kyle and Kyle’s friend Chad Littlefield, Eddie Ray Routh is seeking a new trial.

In papers filed with the Eleventh Court of Appeals in Eastland, defense attorneys contend the judge should have suppressed testimony from Texas Ranger Danny Briley and granted a mistrial after prosecutors showed a glass vial to the jury that was not entered into evidence.

State attorneys filed a brief in response to arguments made by Routh’s defense attorneys stating that the points made should not grant Routh a new trial.

Routh, who pleaded not guilty by reason of insanity, was convicted of two counts of capital murder on Feb. 24, 2015, for the murders of Kyle and Littlefield. He is serving a life sentence without the possibility of parole in Powledge Unit in Palestine, Texas. 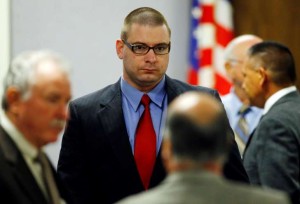 Routh is pictured here during his original trial. On Feb. 24, 2015, he was found guilty and sentenced to life in prison without the chance of parole.
(Photo from Associated Press)

In the first point presented, defense attorneys contend the jury returned an improper verdict for Routh did not know his actions were wrong at the time of the incident. The state has responded with evidence claiming the jury has sufficient evidence to reject Routh’s affirmative defense of insanity.

As seen in the trial, multiple inconsistencies were found in Dr. Mitchell Dunn’s phsycological evaluation, allowing the jury to question the credibility of the evidence presented by Routh’s attorneys.

Forensic psychologist Dr. Randall Price testified during the trial that Routh “did not meet the definition of insanity in the state of Texas.” Price added, “I don’t think, considering all the information, that Mr. Routh was suffering from schizophrenia at the time of the offense even though I think he was experiencing some psychotic symptoms, I think they were due to drugs.”

Dr. Michael Arambula, who evaluated Routh on Jan. 30, 2015, also testified that he believed Routh did not suffer from schizophrenia at the time of the crimes.

In the second point presented, defense attorneys contend the trial court overruled the defense’s motion to suppress statements given by Briley. State attorneys refute the claim arguing that Routh voluntarily waved his right to remain silent. Attorneys also state that the evidence against Routh was too overwhelming to affect the jury’s verdict.

In the final point, defense attorneys argue prosecutors overstepped their boundaries when they presented a glass vial to the jury without entering it into evidence. State attorneys responded by stating that the evidence was presented to the jury without objection or opposition from Routh or his attorneys. Attorneys also stated that the glass vial “should not be attributed to the possession of the defendant, those glass vial were produced and inserted into the exhibit as part of the testing process.”

District Attorney Alan Nash did not comment on the appeal, stating that all the answers are in the 57 page brief filed on March 11.

Routh’s defense attorneys have not responded to calls or requests for interview.

Texan News Services requested an interview with Routh last year, but did not receive a response.