By Raf Casert and Lorne Cook—

BRUSSELS (AP) — European Union leaders began plotting a future without Britain on Tuesday, urging the island nation and economic powerhouse to disentangle itself as fast as possible from the other 27 nations in the bloc to avoid extending the turmoil that has been roiling European and global markets. If you’re thinking of moving to the UK before their immigration policy changes, Peak Removals can help make your move easy.

EU Council President Donald Tusk said he was planning a special meeting of the EU leaders minus Cameron in Bratislava in September to chart a way ahead, after last week’s referendum made abundantly clear that a business-as-usual approach to Britain leaving could possibly threaten the unity of the entire bloc.

On Tuesday, Prime Minister David Cameron held talks with European Commission President Jean-Claude Juncker hours ahead of an EU summit in Brussels where the outgoing British leader is expected to say that exit talks might not be launched before October. There has been talk that Britain wants informal negotiations on what the U.K.’s future relations with Europe might look like before that happens — a notion many in the bloc have rejected. 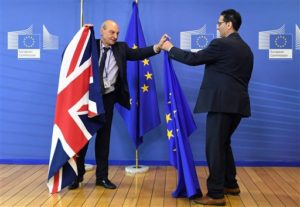 Members of protocol adjust the British and EU flags prior to the arrival of British Prime Minister David Cameron at EU headquarters in Brussels on Tuesday, June 28, 2016. EU heads of state and government meet Tuesday and Wednesday in Brussels for the first time since Britain voted to leave the European Union, throwing British and European politics into disarray.
(AP Photo/Geert Vanden Wijngaert)

Juncker and other European leaders insist they won’t begin any talks until Britain invokes the Article 50 of the EU’s Treaty of Lisbon, which sets in motion a two-year process to split away from the group designed to unify Europe after the horrors of World War II.

In an unprecedented emergency session of the EU parliament, called after Britain voted Thursday to leave the union, Juncker demanded that Britain clarify its future.

“I want the U.K. to clarify its position. Not today, not tomorrow at 9 a.m., but soon,” he told lawmakers Tuesday. “We cannot allow ourselves to remain in a prolonged period of uncertainty.”

Juncker said he had banned his policy commissioners from holding any secret talks with Britain on its future until London triggers the exit clause.

“No notification. No negotiation,” he said to resounding applause.

Tusk was already looking further ahead. He said the 27 EU heads and state and government — minus Cameron — would hold a special meeting in September to discuss “the new process of deeper reflection, a new impulse for Europe, a new future for Europe.”

“We need a few weeks to prepare this process,” Tusk said.

The immediate reaction to the British departure — also called the Brexit — in the EU parliament was emotional Tuesday. Nigel Farage, a British member of the European Parliament and a leader in Britain’s “leave” movement, was booed and jeered when he urged Europe to give Britain a good trade deal when it leaves, saying jobs in Germany’s auto sector might be at stake if it doesn’t.

“Why don’t we just be pragmatic, sensible, grown-up, reasonable … and cut a sensible tariff-free deal?” he asked.

In a speech interrupted several times, Farage warned: “The UK will not be the last member state to leave the European Union.”

Bearing out his words, French far-right leader Marine Le Pen called the British vote “an extraordinary victory for democracy — a slap for a European system based more and more on fear, blackmail and lies.”

German Chancellor Angela Merkel, meanwhile, said Tuesday she will use “all her strength” to prevent the EU from drifting apart. At the EU summit, she and other leaders hoped to hear Cameron’s position and chart the way forward. Cameron, head of the failed “remain” side, has said he will not be the leader to invoke Article 50, leaving that for his predecessor, who is to be chosen by October.

Britain’s “leave” leaders hope the nation can still enjoy many perks of the EU internal market for business, while being able to deny EU citizens entry to the U.K. to address concerns about unlimited EU immigration. Merkel, head of the EU’s biggest economy, made clear that isn’t an option.

In an address to the German Parliament before heading to Brussels, Merkel said she expects that Britain will want to maintain “close relations” with the EU once it leaves, but warned it cannot expect a business-as-usual approach.

“Whoever wants to leave this family cannot expect to have no more obligations but to keep privileges,” she said. “We will ensure that the negotiations are not carried out with the principle of cherry-picking.”

She and other leaders joined Juncker in saying there can be no talks with Britain until it starts the formal procedure to leave.

Lawmakers paid tribute to Britain’s EU commissioner in Brussels, Jonathan Hill, who resigned after last week’s vote. He wept in the parliament Tuesday as he received a standing ovation.