The play “Master Herold and the boys” hits the Tarleton stage

The play is a part of a plan to launch the commemoration of the 50th Anniversary of the 1964 Civil Rights Act. It is also a part of many events at Tarleton that will celebrate the anti-discrimination legislation and Civil Rights Movement.

Director Mark Holtorf explained the purpose for the play and its importance. 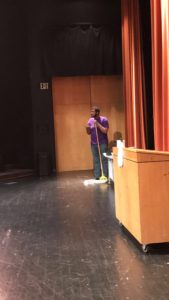 Cedric Kimble, on stage getting stage directions for his character. Photo by Rebecca Hernandez 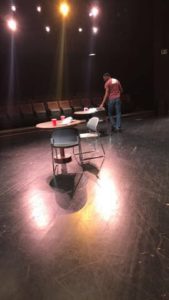 Justin Fite, setting the stage during rehearsal for his character. Photo by Rebecca Hernandez

“The administration and the college of liberal and fine arts, had requested that departments had to do something for [the commemoration]. This play just fit it perfectly. Even though it is set in South Africa, (it is) set in 1950, The same problems existed then (and) are still part of our fabric (in society) and the play addresses that,” said Holtorf.

Actors described their understanding of the issues presented in the play, as well as their experiences.

“It touches on a lot tensions that are felt to this day still. Unfortunately, there is a racial divide and this play doesn’t play shy of exposing the issues,” Junior Willie Byrum said.

“It matures you, you have to be able to see the world through their eyes and put your feet in their shoes. This play is emotionally… draining,” said Cedric Kimble, junior.

“This play is powerful, definitely will be able to see how the relationship’s unfold and fall. Morals are definitely tested,” said Justin Fite, also a junior.

The three-person play is set in a tea room during the 1950’s in apartheid South Africa.

“I think they are doing an incredible job bringing themselves to their characters. It’s been a great little team and I’m impressed with all the actors and what they had to bring,” Holtorf said.