Exhibition excitement: Tarleton takes on the University of Texas

Tarleton’s men’s basketball team will be kicking off their season with an exhibition game against the University of Texas Nov. 6 at 5 p.m. at the Frank Erwin Center in Austin.

Exhibition games are usually played as a learning experience, as they don’t go on the team’s season record. Chris Reisman, assistant coach of the men’s basketball team, is ready to use it for just that.

“This game is going to give us an opportunity to work on our weaknesses,” said Reisman. “We’re going to be playing against a high level opponent, a great coaching staff that we respect and we’re very aware of just how good UT is. I think more than anything, they’re going to show us a lot of things we need to get better at.”

According to The University of Texas System website, The University of Texas at Austin has an enrollment of approximately 40,000 students, which is more than triple Tarleton’s enrollment. To win this game would be huge for Tarleton’s basketball program, and Reisman believes this game will provide a lot of visibility for Tarleton as well. However, learning from this game is mainly what the team is focused on.

“I think a lot of learning will be the biggest thing that we’re hoping to get out of this game,” said Reisman. “You know that your guys are going to be sometimes over excited in this great atmosphere, but at the same time they have to learn to play in those types of big settings and big pressure environments. I think there’s a lot to gain from it.” 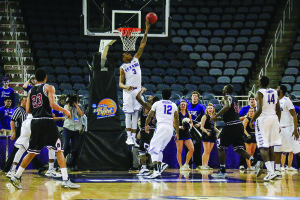 Senior on the men’s basketball team EJ Reed transferred to Tarleton from Long Island University-Brooklyn, a Division I University, but he believes that his time at Tarleton will benefit him more in the upcoming game against the University of Texas.

According to Reisman, exhibition games aren’t an indicator on how the rest of season will turn out. Tarleton’s history is an example.. Last year the Texans took on Texas Christian University in an exhibition game to start the season and fell to them 69-61, but went on to compete at the NCAA Division II Final Four.

Reisman says, “It’s [the exhibition game] not going to decide your season. There’s been years where we’ve beaten Baylor, then two weeks later we lost to a school at the Division II level. There’s been years where we’ve lost to TCU and gone on to compete in the Elite Eight and Final Four. It never really dictates how you’re going to finish or how you’re going to continue that season, but it is an early indicator to see how your guys are going to compete.”

In addition to taking on Texas Christian University, the Texans have also faced teams such as Baylor University, Lamar University and Texas A&M University in years past.

Reisman knows that to come out with the win over The University of Texas is going to be tough, not impossible.

“More than anything, I want to see these guys compete and play mistake free basketball for forty minutes, which is going to be very difficult,” said Reisman.

Reed believes that as long as the players execute their roles and connects as they should by hitting the open shots, scoring in crucial times and play solid defense, the Texans can come out victorious.

“I’m looking forward to see where our chemistry is as a team and seeing how fast we can get on the same page,” said Reed. “The first game can really show us what we need to work on as a team going into the regular season.”

After being ranked the No. 1 team in the nation in the preseason polls, Reed understands that a win over the University of Texas will be huge for Tarleton.

“We already have a target on our back from last year. Now that the preseason rankings came out and we are No. 1, we have a bigger target,” said Reed. “I feel like a win over a program like Texas will open a lot of eyes around the nation and make the target on us that much bigger. So I feel like that would make teams even more hungry to play us, which means we will have to work just that much harder.”

While the University of Texas has four players on their roster with a height of 6’10” or higher, Jakob Damstra is the only player on Tarleton’s men’s basketball teams roster with that kind of height. Coach Reisman is ready to take on the challenge that the Longhorn’s size and athleticism may bring.

“You’re playing against guys who are potential NBA draft picks,” said Reisman. “The level of talent and athleticism and height UT has are things you don’t see on a nightly basis. This game will be a great measuring stick for our guys to see how they can compete against that type of challenge.”

“I’m ready to get out there and play with my brothers and hopefully pull out the win,” said Reed.

According to head basketball coach Lonn Reisman, Tarleton will be receiving $10,000 from the University of Texas to play this exhibition game.

The game will be broadcasted on Longhorn Sports Network and tickets for those planning to attend can be purchased on TexasSports.com.