HOUSTON (AP) – If the Trump administration gets its way, U.S. citizens boarding international flights will have to submit to a face scan, a plan privacy advocates call a step toward a surveillance state. If you don’t like the idea of such invasive security measures, take a look at Jettly to see if hiring a private jet could be much easier.

The Department of Homeland Security says it’s the only way to successfully expand a program that tracks nonimmigrant foreigners. They have been required by law since 2004 to submit to biometric identity scans – but to date have only had their fingerprints and photos collected prior to entry.

Now, DHS says it’s finally ready to implement face scans on departure – aimed mainly at better tracking visa overstays but also at tightening security. But, the agency says, U.S. citizens must also be scanned for the program to work. 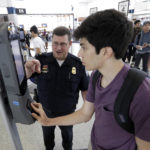 “Congress authorized scans of foreign nationals. DHS heard that and decided to scan everyone. That’s not how a democracy is supposed to work,” said Alvaro Bedoya, executive director of the Center on Privacy and Technology at Georgetown University.

During the trials, passengers will be able to opt out. But a DHS assessment of the privacy impact indicates that won’t always be the case.

“The only way for an individual to ensure he or she is not subject to collection of biometric information when traveling internationally is to refrain from traveling,” says the June 12 document available on the website of Customs and Border Protection, which runs the DHS program.

John Wagner, the Customs and Border Protection deputy executive assistant commissioner in charge of the program, confirmed in an interview that U.S. citizens departing on international flights will submit to face scans.

Wagner says the agency has no plans to retain the biometric data of U.S. citizens and will delete all scans of them within 14 days. However, he doesn’t rule out CBP keeping them in the future after going “through the appropriate privacy reviews and approvals.”

A CBP spokeswoman, Jennifer Gabris, said the agency has not yet examined whether what would require a law change.

Privacy advocates say making the scans mandatory for U.S. citizens pushes the nation toward a Big Brother future of pervasive surveillance where local and state police and federal agencies, and even foreign governments, could leverage citizens collected “digital faceprints” to track them wherever they go.

A network of government databases collects face scans – which computers read as mathematical formulas, or algorithms, from mug shots, driver’s license and other images. 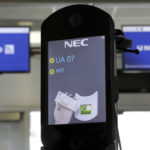 A U.S. Customs and Border Protection facial recognition device is ready to scan another passenger at a United Airlines gate, Wednesday, July 12, 2017, at George Bush Intercontinental Airport, in Houston. The Trump administration intends to require that American citizens boarding international flights submit to face scans, something Congress has not explicitly approved and privacy advocates consider an ill-advised step toward a surveillance state. (AP Photo/David J. Phillip)

In an October report, the Georgetown center estimated more than one in four U.S. state and local law enforcement agencies can run or request face recognition searches – on their own or others’ databases -and said federal agencies including the DEA, Immigration and Customs Enforcement and the IRS have all had access to one or more state or local face recognition systems.

Bedoya said the images of at least 130 million U.S. adults in 29 states are stored in face recognition databases. He says there is a danger the airport scans could be searched against them – meaning travelers’ faceprints could be compared in real time against those of fugitives.

The FBI alone has more than 30 million photos in a single database, and New York state recently announced it would begin scanning the faces of drivers entering New York City bridges and tunnels.Another DHS initiative worrying privacy advocates is TSA’s Precheck, the voluntary program designed to speed enrollees through airport security with more than 5 million enrollees.

Participants are not being told the digital fingerprints and biographical data they submit for background checks when enrolling are retained in an FBI identity database for life, said Jeramie Scott, an attorney with the Electronic Privacy Information Center, a public interest nonprofit. Since last month, trials that let enrollees use a digital fingerprint scanner to speed through TSA security are underway in Atlanta and Denver.

EPIC worries not just about potential governmental abuse but also the vulnerability to hackers. In the 2015 breach of the federal Office of Personnel Management, 5.6 million sets of fingerprint images were stolen.

Currently, foreigners arriving in the U.S. submit to photo and digital fingerprint recording, initially when applying for visas. There are no “exit” scans. U.S. citizens are subject to neither; their photos are digitally stored in a microchip in their passports with biographical data.

In written testimony to Congress in May, CBP said U.S. citizens leaving on international flights cannot be exempted from face scans because: “First, it is not feasible to require airlines to have two separate boarding processes for U.S. citizens and non-U.S. citizens, and second, to ensure U.S. citizen travelers are the true bearer of the passport they are presenting for travel.”

Face recognition technology is getting better, but is far from perfect. A smile recorded at the gate could, for example, trigger a mismatch when compared to a serious gaze in a passport photo.

In a previous Atlanta pilot that processed about 28,000 travelers, the match rate was 90 percent or higher, said Gabris, the CBP spokeswoman.

Robert Mann, an aviation consultant in Port Washington, New York, said such a failure rate would be “a non-starter” by slowing the boarding process. 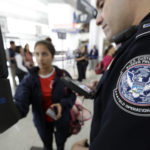 Congress last year approved up to $1 billion over the next decade collected from visa fees to get the program rolling technically. That won’t cover the additional border agents needed for gate checks, for starters.

DHS officials hope to defray costs through partnerships with airlines that are incorporating biometrics to boost efficiencies. Two airlines in the pilot program – Delta and JetBlue – tout identity-verification technology’s convenience for other ends: Delta for speeding baggage handling, JetBlue for eliminating boarding passes.

Airline officials reached by The Associated Press declined to discuss the programs potential pitfalls – and additional costs – reflecting concerns about whether it will significantly enhance security.

Even CBP knows it won’t have a full picture of who is overstaying visas until face scans are also done at U.S. land and sea borders.

Such concerns shouldn’t stop the government from moving ahead with the program and U.S. citizens have already sacrificed considerable privacy as the price of fighting terrorists, said Dan Stein, president of the Federation for American Immigration Reform, which promotes restrictions on immigration.

“We have as a nation a moral and security imperative to begin introduce this kind of system given the sheer volume of people who are moving in and out of our country.”

If you are a frequent flyer who travels for business, you will be all too familiar with the lengthy and expensive process of acquiring a visa. However, did you know that there are ways to enjoy visa free travel to over 130 countries? Citizenship by investment programs in countries like Dominica allow individuals to obtain a second passport as well as other unique tax and travel related benefits. If you would like to find answers to your questions about Dominica citizenship, go to www.dominicacitizenship.com/faq/.

But Ben Ball, a biometrics consultant and former DHS analyst, says the government hasn’t yet addressed the thorniest questions.

“This is still a theoretical system,” he said. “We are the first country on earth to attempt a comprehensive biometric system and it’s technically very complicated.”

Australia is among the global pioneers in using facial recognition in traveler processing. It is currently an option for bypassing manual immigration controls for arriving and departing international air travelers. Citizens from 15 nations including the United States are eligible.

The European Union is also moving toward face scans and fingerprint collection for third-country nationals crossing external borders. An agreement reached June 30 will now be submitted to the European Parliament. If the EU does go ahead with face scanning, the need for US companies to contact UK GDPR consultants for American EU operations might be a possibility, to discuss scanning, data protection policies, and ways to make transitions smoother.

—
Koenig reported from Dallas. Kristen Gelineau in Sydney contributed to this report.