A family of five from Weatherford was severely injured after a devastating crash on Highway 281, one mile from Stephenville. The Harper family was traveling back home from a vacation at a national park on Friday, June 12 when the single car accident sent husband and wife, 46-year-old Randy Harper and 39 year-old Misti Harper, and their three sons including 18-year-old twins, Pierce Harper and Preston Harper, and 15 year-old Paxton Harper to the hospital. 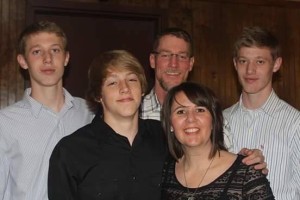 “As far as I’m aware, they had a fifth wheel travel trailer behind them,” stated Aaron Harper, one of Randy’s sons who was not involved in the crash. “I was told that the front driver side tire had just exploded and they saw smoke from that tire. When it blew out, the rim dug into the road, causing the truck to drive left and basically have no brake power since there was about 14,000lbs [with the trailer] behind them.”

Aaron explained that the blow-out caused the truck to drift off into a ditch. Upon hitting the ditch, the trailer disconnected and the unhitched truck struck a tree head-on. Aaron’s three brothers were able to evacuate the truck, but his dad and step-mother were trapped inside until DPS and CareFlite arrived. Aaron mentioned that a few bystanders also pulled over to help, including a man who got in the truck with Aaron’s parents and kept them calm until emergency services arrived. 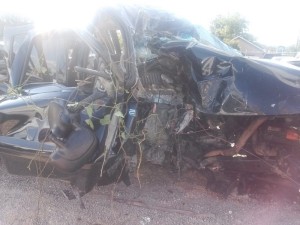 The Harper family’s vehicle was crushed from the accident.
Photo Courtesy of Aaron Harper

According to Aaron, Randy and Misti were taken by CareFlite to JPS Hospital in Fort Worth while the three boys were flown to Texas Harris Methodist Hospital in Fort Worth. Preston was released from Texas Harris Methodist on Friday, the night of the crash. Pierce and Paxton are being released today. He added that all three sons suffered from small fractures to their spine.

Aaron explained the extent of his parents’ injuries by saying, “My stepmom, who is now in surgery, had a disc that had been completely disintegrated in her lower back from the impact and has 7 broken ribs – 3 on one side, 4 on the other – and possibly a concussion. She was unconscious after the impact, I was told, going in and out of it. My dad had dislocated his hip, and when it dislocated, the ball joint in his hip broke the patella wall.”

Randy is looking at having surgery possibly today or Tuesday. 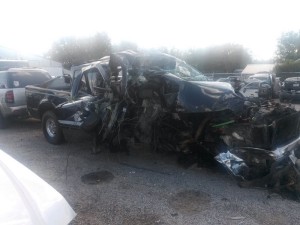 The crash of the Harper family’s 2005 Ford F-250 put both parents and their three sons in the hospital.
Photo Courtesy of Aaron Harper

The family is promoting “Hope for the Harpers” and asking for donations online at: http://www.gofundme.com/ww3b6y8

“It’s really to help take care of hospital bills, food, bills at home, – since they’ll be out of work for a while – and an attorney to help,” said Aaron.

He added, “I’d say they’re all very happy to have made it out alive just due to the crash and how bad it was. I know our whole family, as well as friends, are very thankful to see them all in one piece. That’s for sure.”

U.S. Highway 281 is the scene of not only the Harper family’s accident but also the all-too-familiar fatal wrecks for Sade Lowrey on Sept. 1, 2014 and Courtney Smalley, Kimberly Peacock, Matthew Keith, and Tsanti Keith on April 28, 2013.

Accidents like these are happening too frequently. Truck drivers or any driver for that matter should take more consideration for their own physical ability to drive- whether that is if you feel tired and are unable to make the full journey or remembering to take your required breaks throughout the day. Even checking the miles/hours will give you an indication of how safe it is to be on the road. Looking into something like Blue Ink BIT ELD Review – Tech, Features & Pricing will provide you with a solution of how to stay safe on the road while at work. Accidents can cause issues not only for the driver, but for the people involved too. If you are in an accident involving a truck in New Mexico, you may wish to seek legal assistance with your potential claim from Parnall Law Firm.

The Harper family is recovering both emotionally and physically from this near-death experience. More passing lanes have been introduced onto Highway 281 in an attempt to lessen the occurrence of car accidents, but this 75 mph highway still has a dangerous reputation.