Fears of ‘Guantanamo north’ amid search for prison sites

MIAMI (AP) — Attorney Omar Farah met with three clients last month at the prison on the U.S. Navy base at Guantanamo Bay, Cuba, and each worriedly asked a version of the same question: Are we going to the United States?

President Barack Obama will soon present a new plan to close the Guantanamo detention center in an attempt to finally fulfill a pledge made the first day of his first term in office, and remove what many consider a stain on the country’s human rights record.

But with the administration evaluating possible sites to hold Guantanamo inmates in the United States, even the most vocal advocates for shuttering the prison are concerned that closure will simply mean creating a “Guantanamo north,” moving detainees to a less high-profile location, while continuing to hold them indefinitely.

“Guantanamo is a symbol of injustice because many of the men there have been imprisoned without charge or trial for more than a decade,” said Jameel Jaffer, deputy legal director of the American Civil Liberties Union. “Moving the men to a prison in the United States won’t address this injustice; it will just create a new Guantanamo in place of the old one.” 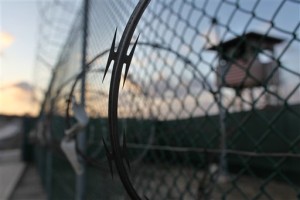 File – In this May 13, 2009 file photo, reviewed by the U.S. military, the sun rises over the Guantanamo detention facility on the Guantanamo Bay U.S. Naval Base, Cuba. President Barack Obama will soon present a new plan to close the Guantanamo detention center in an attempt to finally fulfill a pledge made the first day of his first term in office, and remove what many consider a stain on the countrys human rights record.
(AP Photo/Brennan Linsley, File)

easily be brought to trial but are considered too dangerous to free, and others who have been cleared for release but can’t be sent to their home countries.

Farah’s clients fall into the latter category: All three have been approved for release since at least 2009, including Tariq Ba Odah, who has dropped to 74 pounds because of an ongoing hunger strike. All they want after 13 years of confinement is to get out, not to be sent to a different lockup in the United States.

“One of the first questions they asked when we sat down is, ‘What do you think is going to happen?'” said Farah, who has been trying to persuade a court to order Ba Odah’s immediate release. “It’s very unnerving for them.”

Expected to be submitted soon to Congress, the administration’s closure plan will include a request to lift a ban on transferring detainees to the U.S. Officials have not disclosed details, but the Defense Department has scouted potential prison sites in Kansas, South Carolina and elsewhere.

Myles Caggins, a spokesman for the National Security Council, said the president still has “a steadfast commitment to closing the Guantanamo detention facility.”

But others have made it clear closure will not mean a halt to open-ended detention.

Defense Secretary Ash Carter said recently that about half the prisoners “are not safe to release, period.”

Opponents of the Gitmo detention center say the U.S. should try to prosecute whomever they can and release the rest.

A transfer stateside could result in some benefits for prisoners, such as easier access to lawyers and perhaps the first visits by family members. But Kenneth Roth, executive director of Human Rights Watch, said any gains would be undermined by maintaining a policy of indefinite detention.

“No one would think that is a fulfillment of his pledge to close Guantanamo,” Roth said. “It would just be a transfer of the problem.”

Of the 116 prisoners remaining at Guantanamo, 52 have been cleared for release. But most of those are from Yemen, which Washington considers too unstable to send prisoners.

Resettling detainees in third countries has been tricky, in part because the defense secretary has been slow to give final security assurances required by Congress. The last to leave were six Yemenis sent to Oman in June in a deal that had been a year in the making.

The remaining 64 include some in various stages of prosecution, such as five facing a long-stalled trial by military commission for alleged roles in orchestrating the Sept. 11, 2001, terrorist attacks. Prosecutors say relatively few could be tried for war crimes by military commissions, and could only be charged if sent to U.S. civilian courts.

Thirty-two are under a “law of war detention” designation, meaning the U.S. doesn’t have evidence to charge them but asserts the right to detain them until the end of hostilities. The uncertain nature of the terror conflict means they could theoretically be held forever.

Roth said officials fear the political consequences if released detainees were to attack the U.S. in the future, but argued that the risk is overstated.

For inmates, who avidly follow any news about their confinement via satellite TV and the kind of internal rumor mill common to all prisons, the latest developments are deepening a sense of despair that provoked Ba Odah and others to stop eating in protest.

“The government has no intention of charging him and in fact it has disclaimed any interest in holding him, and yet it keeps him at Guantanamo day in and day out, potentially forever,” Farah said. “That is something that Mr. Ba Odah feels is cruel, unjust and violent.”